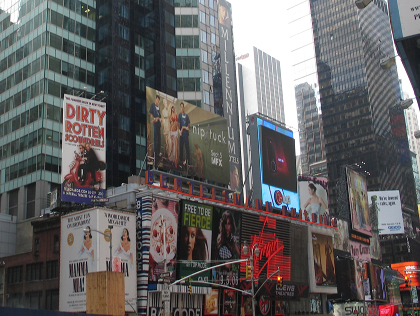 For many people, a visit to New York City is not complete without seeing a Broadway show. But with 40 Broadway theaters, which shows are the best to see and how much do they cost? Although every Broadway venue is worth exploring, it really all depends on what you want to see; timeless classics such as "Les Miserables" and "The Phantom of the Opera" or 2014 Tony Award winners "A Gentleman's Guide to Love and Murder" and "All the Way"? Get ready to see a Broadway show and use this guide for money-saving tips, the best shows and where to dine before or after the show.

Where to Get Tickets

Broadway tickets can be purchased in several ways but here are some of the best:

Tickets can be purchased directly from each theatre, at the respective box offices, by telephone or online. Purchasing tickets at box offices is the most affordable way to obtain tickets in advance.

Discounted tickets can be purchased the day of the show at any of the TKTS booths operating in New York City – in Times Square, downtown Brooklyn and the South Street Seaport. While tickets can be obtained from 20 to 50 percent off the normal price, expect to wait in line, especially in Times Square.

Related: How To Save Money While Traveling - Taking Public Transportation

"A Gentleman's Guide to Love and Murder"
www.agentlemansguidebroadway.com

This rousing and hilarious musical recently won four Tony Awards, including Best Musical. In the lead role is the award-winning actor Jefferson Mays, who won a Tony for Best Performance by a Leading Actor in a Play for his work in the Pulitzer prize-winning, one-man play, "I Am My Own Wife." Other performers include Bryce Pinkham as Monty Navarro and making their Broadway debuts - Lisa O'Hare as Sibella Hallward and Lauren Worsham as Phoebe D'Ysquith.

Based upon Walt Disney's popular 1992 film, "Aladdin" is one of Broadway's newest plays and it's getting rave reviews from the likes of The New York Times, Entertainment Weekly and the The Associated Press. Adam Jacobs stars in the lead role and features Courtney Reed as Jasmine and James Monroe Iglehart as the Genie. Among the most entertaining songs from the play are "Arabian Nights," "Friend Like Me" and "A Whole New World," the 1993 Oscar winner for Best Original Song and the Grammy Award winner for Song of the Year.

Based upon the life of Carole King and her emerging success as a singer-songwriter, the play stars Jessie Mueller, winner of the 2014 Tony Award for Best Leading Actress. The story begins in 1950s Brooklyn with King already playing the piano and writing songs as a teenager before marrying Gerry Goffin when she was 17. Many of her earliest hit singles co-written with Goffin are featured in the play, such as "The Loco-Motion," "Up On a Roof," "Chains," Take Good Care of My Baby," "Will You Still Love Me Tomorrow" and "One Fine Day." But her most acclaimed work is also presented in the play, with a particular emphasis on songs from her Grammy Award-winning 1971 album "Tapestry" – "So Far Away," "I Feel the Earth Move," "(You Make Me Feel Like) A Natural Woman," "It's Too Late" and the title song, "Beautiful."

Based upon the lives of the 1960s band The Four Seasons and its subsequent breakup, this popular Broadway show first opened in 2005 and has since been produced in a number of American and international cities, including Las Vegas, Chicago, London and Sydney. The current New York cast features Joseph Leo Bwarie as Frankie Valli, Drew Gehling as Bob Gaudio, Richard H. Blake as Tommy DeVito and Matt Bogart as Nick Massi. The 2006 Tony Award winner for Best Musical, "Jersey Boys" features several of The Four Seasons' biggest hits, such as "Sherry," "Big Girls Don't Cry," "Walk Like a Man," "My Eyes Adored You," "Let's Hang On" and "Can't Take My Eyes Off You," all written by Bob Gaudio and legendary producer and songwriter Bob Crewe.

Based upon Victor Hugo's 1862 novel, "Les Miserables" is one of the longest running shows on Broadway. The original Broadway production of 1987 won eight Tony Awards, including Best Musical, Best Original Score and Best Direction of a Musical. The current production features Ramin Karimloo as Jean Valjean, Caissie Levy as Fantine and Samantha Hill as Cosette. Among the most famous songs from "Les Miserables" are "I Dreamed a Dream," "On My Own" and "One Day More." Since it first opened in Paris in 1980, "Les Miserables" has been played in 42 countries and has drawn more than 60 million people.

"Lion King" ranks just ahead of "Les Miserables" as the fourth longest running Broadway show in history. Based upon the 1994 Walt Disney animated film, the Broadway musical won five Tony Awards in 1998, including Best Direction of a Musical and Best Choreography. Many of the movie's most famous and popular songs were written and composed by Elton John and Tim Rice, such as "Circle of Life," "Can You Feel the Love Tonight" and "Hakuna Matata." Elton John and Tim Rice won the 1994 Academy Award for Best Original Song for "Can You Feel the Love Tonight."

Showcasing music from the Swedish pop group Abba, "Mama Mia!" is the longest running "jukebox musical" in history. With more than 5,200 performances, it is among the top 10 longest running shows on Broadway. The current production, which just moved to the Broadhurst Theatre in late 2013, stars Judy McLane as Donna Sheridan, Elena Ricardo as Sophie Sheridan, Lauren Cohn as Rosie, Felicia Finley as Tanya and Alan Campbell as Sam Carmichael. Several of ABBA's most famous songs, written by Benny Andersson and Björn Ulvaeus, are featured in "Mama Mia!" such as "Honey, Honey," "S.O.S.," "Knowing Me, Knowing You," "Take a Chance on Me," "Waterloo" and their most famous and best selling song - "Dancing Queen."

"The Phantom of the Opera"
www.thephantomoftheopera.com

"The Phantom of the Opera" is Broadway's longest running musical, having first opened in 1988. With music composed by the world acclaimed British composer Andrew Lloyd Webber, the musical is based upon the classic novel by Gaston Leroux and later immortalized in the 1925 silent horror film starring Lon Chaney. Since it first opened in London in 1986, the award-winning play has been seen by more than 130 million people, from all over the world. The current Broadway production stars Norm Lewis as the Phantom and Sierra Boggess as Christine Daaé. Highlights from the musical include "The Phantom of the Opera," "The Music of the Night," "All I Ask of You" and "Masquerade."

Winner of the Grammy Award and three Tony Awards including Best Costume Design and Best Scenic Design, "Wicked" celebrated its 10th anniversary on Broadway last year. A family favorite much like the "Lion King," "Wicked" was inspired by Frank Baum's 1900 classic novel and the 1939 film starring Judy Garland. The Broadway production stars Christine Dwyer as Elphaba, Jenni Barber as Glinda and PJ Benjamin as the Wizard. Among the best songs from Wicked are "For Good," "Popular" and "Defying Gravity."

Related: How To Stay Healthy While Traveling
Randy Yagi is a freelance writer covering all things San Francisco. In 2012, he was awarded a Media Fellowship from Stanford University. His work can be found on Examiner.com Examiner.com.