CALISTOGA (CBS SF) -- An intense firefight evolved overnight along a stretch of Highway 29 north of Calistoga as the Glass Fire jumped the freeway and continued its advance into neighborhoods on the outskirts of town, burning at least one home and threatening dozens of others as the blaze expanded its path of destruction.

By early Friday, the fire had grown to more than 60,100 acres and was just 6 percent contained. Fortunately, the extreme gusty winds of the Red Flag Warning issued for the region had yet to develop as noon Friday.

"We are on the edge or border of a Red Flag Warning," said Cal Fire Operations Chief Mark Brutan of the conditions firefighters were facing on the lines in both Napa and Sonoma County.

"There was a consensus (among National Weather Service and Cal Fire forecasters) that a Red Flag Warning was warranted due to the hot temperatures, dry conditions and the expectation of some wind," Brutan said at the Friday morning fire briefing. "The wind, it's really tricky to predict...And like any type of meteorology even though its a bit of science, a practice of an art, it's not always 100 percent accurate."

"So far we have not seen the velocity of the winds we were expecting," he added. "We have seen the flow of the wind coming from the right direction that has been predicted. We are expecting the wind will increase this evening more than we have been seeing lately. But not a significant increase."

As the fire grew overnight, crew from Yakima, Washington, lost a desperate battle to save a home on Tucker Road near Calistoga as other crews attempted to halt the flames advance though the steep, heavy brush and trees on the hillsides. 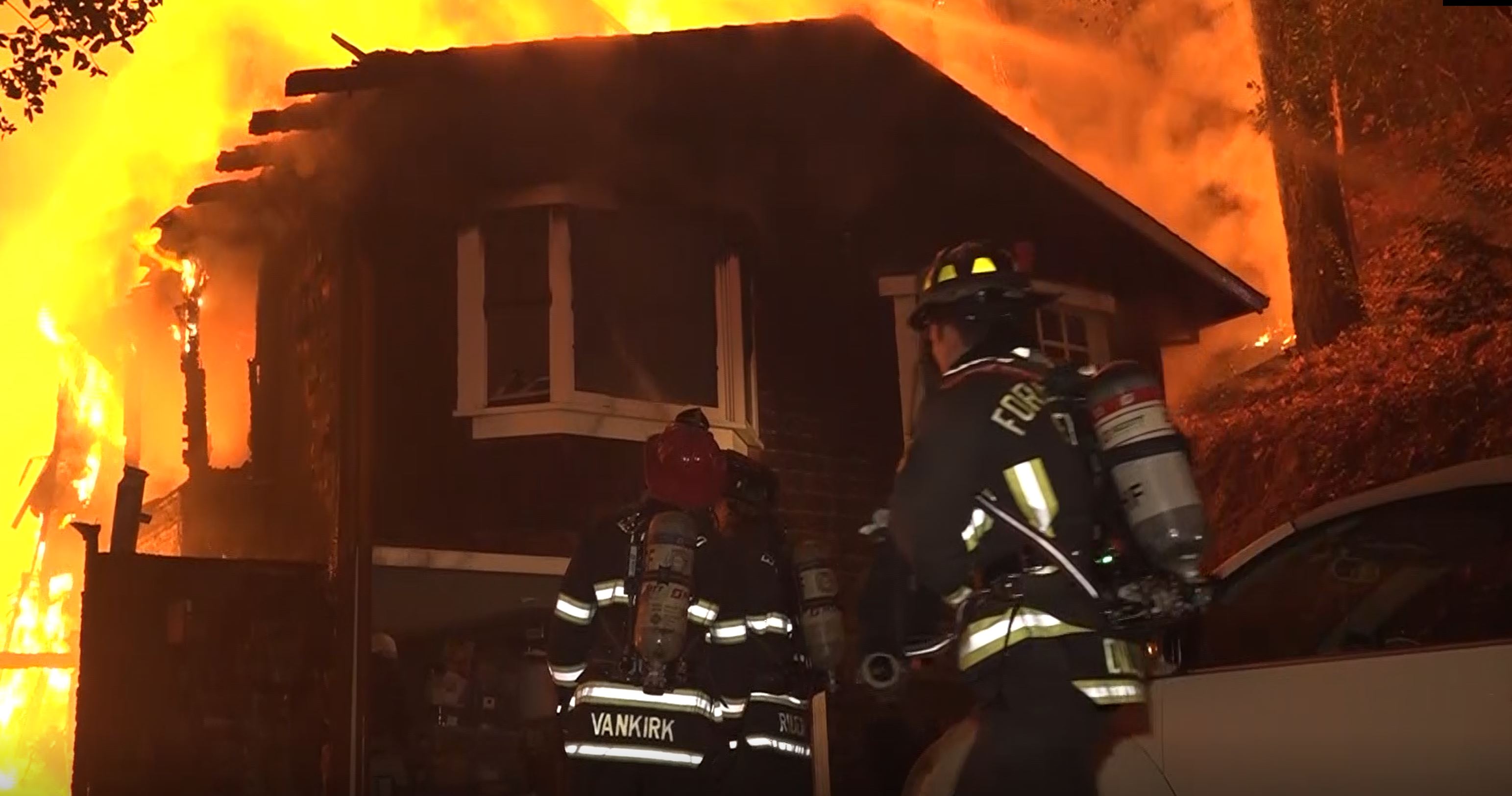 The army of 2,000-plus firefighters battling the flames got another dose of bad news as the National Weather Service extended the Red Flag Fire warning to Saturday. Soaring temperatures in the high 90s and triple digits and humidity levels in the low teens were in the forecast for the day.

Calistoga city officials sent out an alert Friday on the smoke-filled skies which could limit missions carried out by air tankers.

"A layer of heavy smoke is blanketing Calistoga this morning as the mandatory evacuation order continues to be in effect," officials warned. "Air quality within the area remains at hazardous levels...Overnight the most active section of the fire burned up to Highway 29/Lake County Highway a couple miles above Calistoga."

When asked about the fire conditions, Cal Fire incident manager Billy See -- a veteran of the recently-concluded firefight with the now contained CZU Lightning Complex in the Santa Cruz Mountains -- didn't mince words.

"It's going to be a big firefight for us over the next 36 hours," he said. 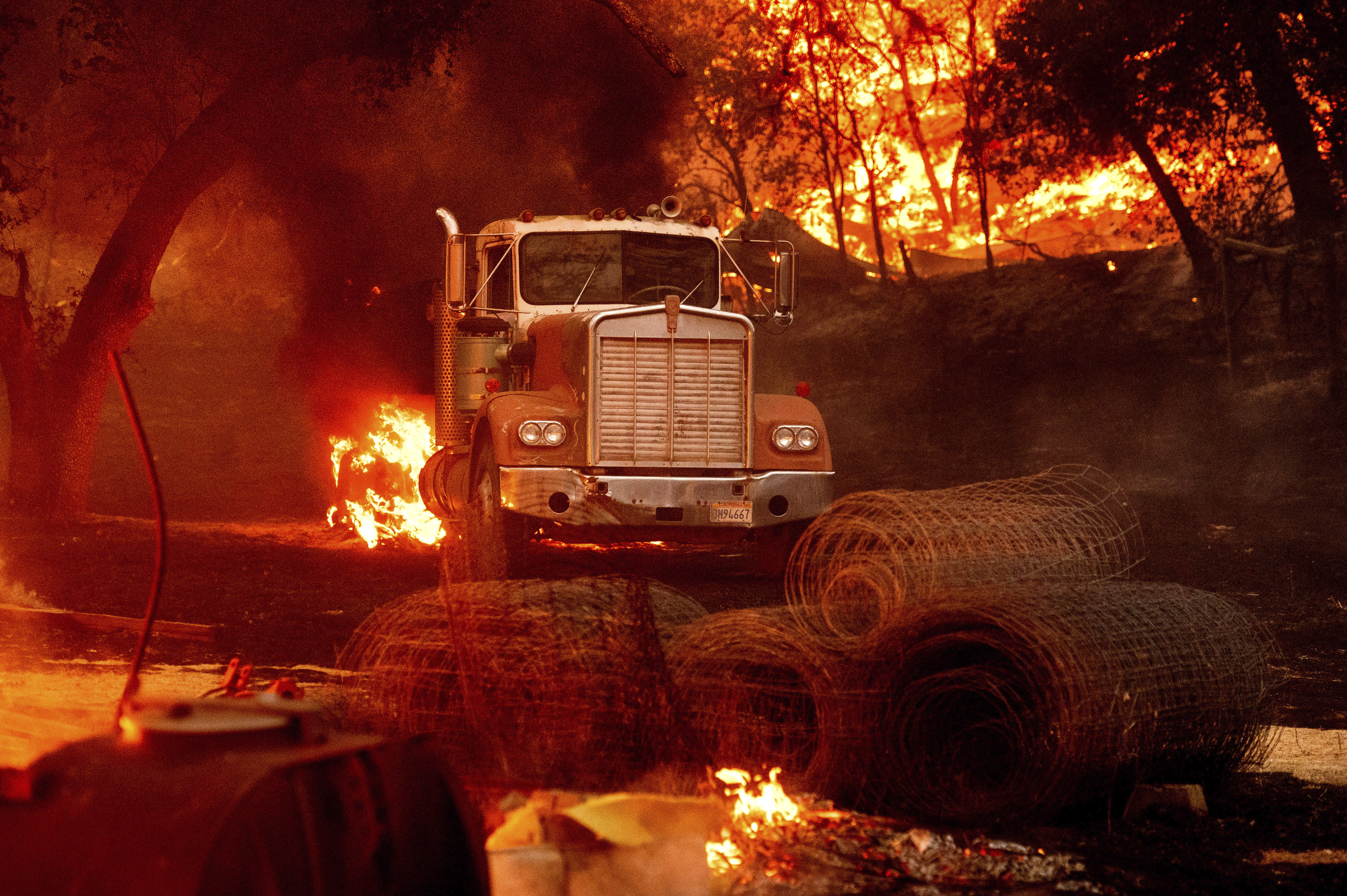 While winds had calmed a bit as dawn neared Friday, the glow of fires could be seen along now closed Highway 29.

The fire was burning on both Sonoma and Napa counties, leaving a path of destruction in its wake. It had destroyed at least 220 homes and 194 commercial buildings in Napa and Sonoma County.

Across the burn zone, firefighters who have traveled from around the state, West Coast, and nation to fight the blaze, waged individual battles with the flames.

Among them was a crew from Encinitas, who used a stang gun to reach the flames climbing up the tree in the backyard of a home on the east side of Highway 29.

Nearby, neighbor Douglas Wright, who was preparing to fight the blaze if it threatened his home for more than 30 years. He said he was ready to flee if the flames became too threatening.

"We don't know what's going to happen," he told KPIX 5. "This year has been really crazy. Fires everywhere."

Wright is prepared to put up a fight of his own. He has 200 feet of hose leading from the pool to his front yard. He was waiting until the very last minute to evacuate. Wright adds, "If it gets too bad I'll leave because I can be down there in two minutes."

On Thursday, Gov. Gavin Newsom toured the Deer Park neighborhood near St. Helena where flames on Sunday caused widespread damage and destroyed many homes. He pledged fire victims that the state was there to help them. 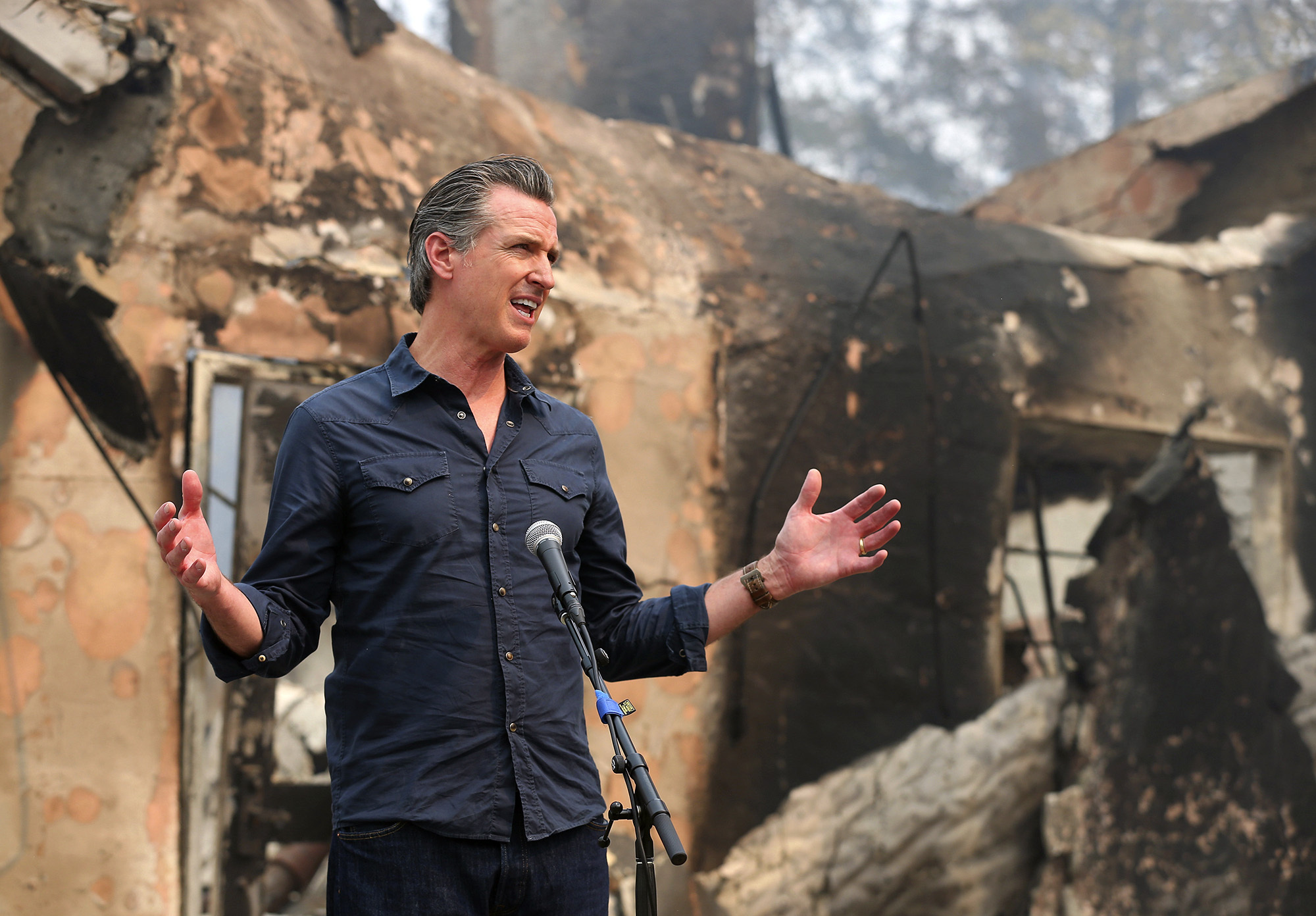 "We're in it for the long haul," Newsom told local residents. "We're not just here for a moment. We have your backs and we're very sorry you're going through all this."

The fire also continued to threaten the community of Angwin. Days ago, Angwin resident Roger Lutz's sister lost her home in Deer Park.

"The one really special part of that was the American flag was still flying. It was like, Well overcome. I'm sorry," said Lutz, apologizing as he choked up with emotion.

Residents who stayed in the area despite evacuation orders are emotionally and physically drained.

"I could see the flames right there, only a block away on the other side of the hill," said said Soon Young Park, another Angwin resident.

Park came back Thursday to help her landlord and friend. They were doing what they could to protect their homes from the fire.

"Last night, I didn't even sleep a minute. Just watching and cleaning and moving all the stuff away from the houses," said Angwin resident Younan Dawood.