SAN FRANCISCO (CBS SF) -- Napa businessman Ian Benjamin Rogers, arrested earlier this month after federal authorities found explosive devices and an arsenal of weapons at his home and business, had plans to attack the State Capitol, Twitter and Facebook, driven by his false belief that President Donald Trump won the November election, according to a criminal complaint made public on Wednesday.

Word of Rogers' alleged plans comes on the same day the Homeland Security Department issued a national terrorism bulletin warning of the potential of violence from people motivated by anti-government sentiment after President Joe Biden's election.

Rogers was formally charged Tuesday by federal authorities with possession of five pipe bombs found by local law enforcement officers and agents during a search of his auto repair business on January 15. Officers also seized dozens of firearms and thousands of rounds of ammunition from his business and home.

According to an affidavit in support of the criminal complaint, text messages recovered from Rogers' phone indicated he intended to attack Democrats and places associated with Democrats in an effort to ensure Trump remained in office. Among the targets authorities said Rogers had in mind were Governor Gavin Newsom's office in Sacramento.

For example, in a message that I believe ROGERS sent on January 10, 2021,2 he said, "We can attack Twitter or the democrats you pick" and "I think we can attack either easily". When the other person responded, "Hmmm" and "Let's go after Soros," ROGERS said, "We can attack Twitter and democrats easy right now burn they're shit down," whereas targeting "Soros," which I believe is a reference to George Soros, would require a "road trip." The next day, ROGERS sent another message to the same person: "I want to blow up a democrat building bad". "The democrats need to pay," he added. "Let's see what happens, if nothing does I'm going to war" "Democrats, Twitter, etc" "I hope 45 goes to war if he doesn't I will".

ROGERS added, "Let's see what happens then we act," but followed it up with "I'm thinking sac office first target" "Then maybe bird and face offices". I believe that when ROGERS said, "sac office first target," he meant that their first target should be the offices of California Governor Gavin Newsom in Sacramento. I further believe that when ROGERS said that the "bird and face" offices would be next, he meant the offices of Twitter ("bird") and Facebook ("face"), because both social media platforms had locked Trump's accounts to prevent him from sending messages on those platforms. "Sad it's come to this but I'm not going down without a fight" "These commies need to be told what's up," he said. 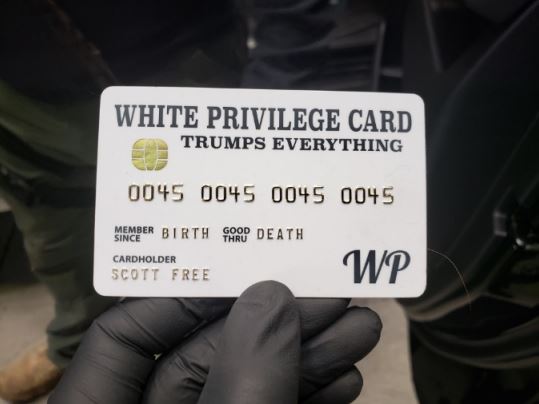 Officers and agents also discovered a sticker on Roger's vehicle window that is commonly used by so-called "Three-Percenters," an anti-government militia movement that espouses resistance to the federal government and pro-gun rights. Minor also referred to a novelty credit card labeled "White Privilege Card" and "Trumps Everything" found in Rogers' possession.

"I know that many extreme anti-government militias are populated by white supremacists. I believe that the statement "Trumps Everything" and the numbers "0045" repeated four times (to make it look like a credit card number), are references to Donald Trump, the 45th President of the United States. 11. Further, text messages recovered from ROGERS's phone indicate his belief that Donald Trump won the 2020 presidential election, and his intent to attack Democrats and places associated with Democrats in an effort to ensure Trump remained in office."

"We allege that Ian Benjamin Rogers possessed homemade pipe bombs and the materials to make more," U.S. Attorney David L. Anderson said in a news release Wednesday. "We draw a bright line between lawlessness and our constitutional freedoms. We will prosecute illegal weapons stockpiles regardless of the motivation of the offender."

On Jan 15th, deputies and FBI agents served the warrants. Inside Roger's business, officers and agents found a large gun safe. Inside the safe, they discovered and seized several guns and the five pipe bombs. They also identified other materials at the scene that could be used to manufacture destructive devices, including black powder, pipes, endcaps, and manuals, including The Anarchist Cookbook, U.S. Army Improvised Munitions Handbook, and Homemade C-4 A Recipe for Survival.

The bomb squad created a bunker with used car tires and detonated those pipe bombs.

"It sounded like propane tanks exploding," said Tyler Rodde, who owns a small business across the street. "We were quite literally blown away by them doing the explosions here on site. That was a big surprise to us. And a total surprise that this was in the neighborhood."

Deputies said 8 to 10 of those firearms seized were either illegal or unregistered. They said one was a high-powered machine gun and deputies found 15,000 rounds of ammunition.

Rogers was arrested and was being held in state custody in lieu of a $5 million bail as he awaits a preliminary hearing. Federal prosecutors intend to seek Rogers's appearance in federal court on the charges in the complaint upon the issuance of a federal order to transfer Rogers to the United States District Court in San Francisco. The date of such appearance has not yet been set.