From the Empire State Building in "Sleepless in Seattle" and "The Sopranos" cafe in the show's finale, to the "Field of Dreams" in Iowa and the Coney Island roller coaster from "Annie Hall," fans have always loved visiting famous television and movie locations. Not surprisingly, many of the most memorable set locations are in America's top entertainment and cultural centers, like New York and Los Angeles. However not all scenes are what they appear to be, since many popular filming locations are merely facades inside Hollywood studios. The following are 10 of the most famous television and movie locations in the U.S.

The historic GE Building was the scene for the popular sitcom "30 Rock," whose series finale aired in January. The flagship skyscraper of the enormous Rockefeller Plaza, the GE Building is home to NBC Studios, where some "30 Rock" scenes were filmed. The Official NBC Universal Store at 30 Rockefeller Plaza offers a variety of "30 Rock" souvenirs, such as t-shirts, Kabletown coffee mugs and memorabilia. New York's 10th tallest building is also home to the NBC Studios Tour where visitors can enjoy backstage views of studios for prominent shows like "The Today Show" and "Saturday Night Live." Other attractions worth visiting at Rockefeller Plaza are Radio City Music Hall, the gilded statue of Prometheus, statue of Atlas on Fifth Avenue and a trip to the Top of the Rock observation deck. 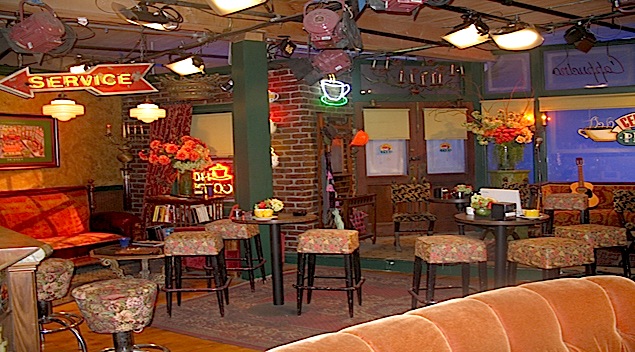 Among the greatest TV shows of all time, "Cheers" was filmed live at Paramount Studios in Hollywood. However the show was based in Boston at a very real bar/restaurant formerly known as the Bull and Finch Pub. Located in one of Boston's most historic neighborhoods, the interior of the real Cheers does not resemble the set from the show that won an impressive 28 Emmy Awards, but it still uses the familiar phrase "where everybody knows your name." Due to its continued success, Cheers Boston opened a new location at the lively Faneuil Hall Marketplace, with a replica of the show's pub. Visitors to Paramount Studios may purchase "Cheers" memorabilia onsite and take a backlot tour, featuring other familiar film sets, like the Chinese restaurant from "Seinfeld" and the beer factory from "Laverne & Shirley."

Although the iconic clock has been removed, film lovers will still remember Courthouse Square from the "Back to the Future" trilogy starring Michael J. Fox and Christopher Lloyd. But this backlot reminiscent of a Midwestern town square has been the location for scores of other well-known movies and television shows. Among the other notable movies and TV programs that shot scenes at this familiar property are "Batman and Robin," "Bruce Almighty," "To Kill a Mockingbird," "Buffy the Vampire Slayer" and "Falling Skies." The Courthouse Square can be viewed as part of the popular Studio Tour at Universal Studios Hollywood, which also features the original "Leave it to Beaver" home and Wisteria Lane from "Desperate Housewives."

The enormous National Mall has been the scene for many important moments in American history from Dr. Martin Luther King's "I have a dream" speech, to the Moratorium to End the War in Vietnam, to Presidential inaugurations. But the National Mall has also been the scene for several enduring movies, most notably in the 1950s sci-fi classic "Day the Earth Stood Still" and one of the most famous scenes from "Forrest Gump," winner of six Academy Awards, including Best Actor, Best Director and Best Picture. In the timeless classic, Tom Hanks in the lead role appears at the Moratorium to End the War as a Vietnam veteran. When given the opportunity to speak and introduced to the estimated 500,000 people in attendance, the only girl he ever loved appears from the crowd, wades through the waters of the National Mall and meets Forrest in an unforgettable embrace amid a thunderous cheer of approval.

New York's oldest delicatessen was the location for the most memorable scene from the 1989 movie "When Harry Met Sally," starring Billy Crystal and Meg Ryan. In the film written by the late Nora Ephron, Ryan's show-stopping, emotional outburst in the deli was so convincing, it prompted another customer sitting nearby to tell the waiter "I'll have what she's having." Today, an overhead sign directly below the now famous table reads "Where Harry Met Sally…Hope you have what she had! Enjoy!" The historic deli, founded in 1888, has been the scene of other famous movies and TV shows, including "Donnie Brasco," "Enchanted," "We Own the Night" and "Law and Order."

Long before David Letterman took over the place, the Ed Sullivan Theater was the setting for one of the most famous television appearances of all time. In 1964, The Beatles made their first ever live American television performance in front of a packed house full of shrieking teenagers and a record-setting 73 million people watching the event at home. When The Doors were scheduled to appear on "The Ed Sullivan Show" in 1967, a producer asked the band not to sing the controversial lyrics, "Girl we couldn't get much higher" from their chart-topping hit "Light My Fire." Lead singer Jim Morrison refused to alter the lyrics and after the show, the producer said, "You'll never work for 'The Ed Sullivan Show' again!" Morrison responded, "Hey man, we just did 'The Ed Sullivan Show!'" Visitors interested in seeing the "Late Show with David Letterman" live and the Ed Sullivan Theater can obtain free tickets but are advised to make plans well in advance.

In 1960, legendary British director Alfred Hitchcock shocked filmgoers with one of the most terrifying movies to ever hit the silver screen. Considered one of the greatest films of all time, "Psycho" broke new ground in the portrayal of sexuality and violence and although innocuous today, was the first movie ever to show a toilet flushing. The horrifying shower scene is one of the most memorable in motion picture history and prevented many who watched the film from taking showers for quite some time. The original "Psycho" house and the Bates Motel are both on display on the Studio Tour at Universal Hollywood.

It may be surprising to discover it's been 15 years since the top-rated sitcom "Seinfeld" had its series finale. Yet even casual viewers of the show remember the chef forever known as "the Soup Nazi" and his wildly popular soup kitchen. The classic 1995 episode was based upon a real New York soup vendor, Ali "Al" Yeganeh, and his now world famous The Original Soupman in midtown Manhattan. Although Yeganeh was initially offended by his nickname, he has become fabulously wealthy and now has more than 500 franchises in the country. The Original Soupman on West 55th Street, a few blocks from Columbus Circle and Central Park, continues to sell crowd favorites like lobster and crab bisques.

It is not photographed as much as the Statue of Liberty or the Empire State Building, yet is known worldwide as the iconic steel globe in Flushing Meadows. Erected as part of the 1964-1965 World's Fair, the Unisphere is one of the only remaining structures from the exhibition widely criticized for exorbitant cost overruns. The Unisphere has been featured in film and television, such as "King of Queens," "CSI: NY," "Men in Black," "Iron Man 2" and "Captain America." Today, the Unisphere is a well-maintained popular tourist attraction, particularly when the U.S. Open tennis tournament is held in September, with a side entrance just minutes away.