More than 2,000 followers came to the Great America Amphitheater to hear the message delivered by the son of famed evangelist Billy Graham.

Standing outside the event, Graham told reporters his mission was to encourage Christian conservatives to vote both in next week's June primary and the November election. 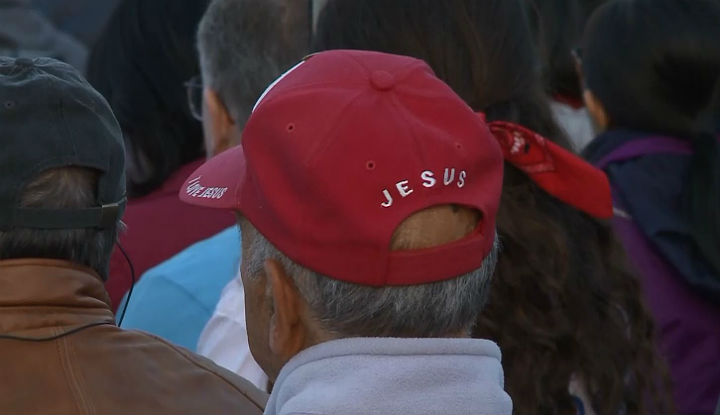 "I want to encourage our Christians to vote," he said. "I think we need the Christian voice in politics today."

Graham said that was especially true in California where he says the 'Blue Wall' of the Democratic Party is dividing the state.

"A person who identifies themselves as progressive pretty much are God-less," he said. "I want to go pierce that Blue Wall, not for politics, but for Jesus Christ."

Rally attendee Steven Larson said he identifies with the message.

"When you take God out of everything, we see all the boundaries are spread out, so I think we need to get God back into it," he told KIX 5. "A lot of these problems are going to be resolved."

"He didn't have the Democrats, of course they were against him, the Republican Party was against him, I think somehow God put him in office," he told reporters. "I don't know. I can't explain it."

Although his message was strongly anti-progressive, Graham said he wasn't there to support any candidate or party. He said it was time to establish a Christian Party.

"I'd like to see every church put up a couple candidates," he said. "Maybe for school board, maybe for city council."

The outspoken supporter of President Donald Trump is in the middle of a 10-stop campaign-style tour of California and his next stop is Friday in Berkeley.

Graham insists he means no mischief when he gives his message Friday night, though he concedes he may be the first evangelical preacher in recent memory to take on the Berkeley electorate. He said he's confident he will be received well in a city that experienced violent and chaotic political protests over other politically conservative events in recent months.

"I'm not going there to judge Berkeley or fuss at it," Graham said in an interview with The Associated Press. "I want them to know that God loves them."

A small protest -- organized on Facebook by a group called Refuse Fascism -- is planned for Friday evening. During a rally to protest San Francisco Police shootings of minority suspects last week, the Rev. Amos Brown, an influential San Francisco preacher, called for demonstrators to turn up in Berkeley on Friday night.

"Graham is one of the leading evangelical preachers who has supported Trump and who is rallying his flock around politics that is extremely dangerous," Refuse Fascism spokesman Barry Thornton said. "We are not trying to stop him. We are voicing our political opinion."

Erin Steffen, a spokeswoman for the city of Berkeley, said police and other officials expect Graham's event to remain uneventful, though more officers will be on duty Friday night. Unlike several other rallies that devolved into riots, Graham's event has received a city permit and his organization is working with police on security and traffic issues, she said.

On Friday, he will deliver his sermon and hold his rally in downtown Berkeley. He concedes with a chuckle that he can't name the last evangelical Christian preacher to appear in Berkeley. But he insists he will be well received in the birthplace of the free speech movement.

"This isn't a political event other than to encourage people to vote," Graham said.