It will be the first total solar eclipse visible in the continental U.S. since 1979. It will also be the first one to sweep across the nation, coast to coast, in 99 years.

In California, we will only see a partial eclipse so many people are scrambling to reserve prime viewing locations elsewhere.

Armed with safety glasses, Anthony Barreiro of the San Francisco Amateur Astronomers club is getting ready to witness his first total solar eclipse.

"It's probably the most awe-inspiring thing anybody can see," he said.

On Monday Aug. 21, the sun and moon will line up with the earth and appear about the same size, revealing the sun's atmosphere or corona.

"Day will turn to night. The air will get cold," Barreiro explained. 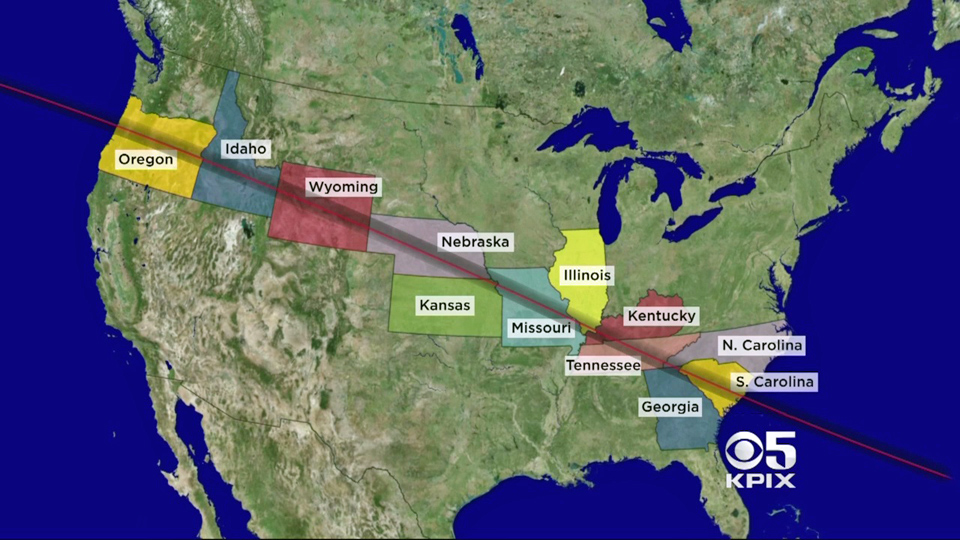 In 90 minutes, the moon's shadow will sweep along a 60-mile wide arc called the path of totality from Oregon to South Carolina.

Jim Todd, space science education director of the Oregon Museum of Science and Industry (OMSI), described what to expect.

"It's traveling close to 3,000 miles an hour," he said. "You have to be at the right place at the right time to witness totality."

Oregon is already shaping up as a hotspot for people planning to view the total eclipse.

"The weather's shown we've had clear skies in the state of Oregon. So the odds are pretty good," Todd explained.

Visitors may have a tough time finding a place to stay anywhere along Oregon's path of totality. In cities like Salem, Albany, Corvallis and Madras the phenomenon could be visible for two minutes. As a result, many hotels in the Willamette Valley are sold out.

At his hotel, eclipse watchers are booking a room with two queen-size beds for about $200 a night, around twice the current rate.

KPIX found other hotels, like one in Corvallis, charging $800 a night.

So what can you do if you're looking for lodging?

"There's still time for people to get on a wait list, maybe see if there's a cancellation," Johnson advised.

For example, accommodations are still available north in Portland, or south in Eugene, where you can still view a partial eclipse.

In addition, more campgrounds will open across the state.

But reservations are going fast and so is admission to three dozen viewing parties, including OMSI's morning-long event for thousands at the Oregon State Fairgrounds in Salem.

Andrea Edgecombe, OMSI director of events, says, "There's a lot of people coming from Japan, Canada, and then all over the U.S."

Up to a million visitors are expected in Oregon as the eclipse crosses the Beaver State in nine minutes. Travel Oregon advises against a mass entrance and exodus.

"Make a trip out of it," said Allison Keeney, Global Communications Manager for Travel Oregon. "Take that vacation with your family. Stay for the week or weekend."

As for Anthony Barreiro, he plans to watch the total eclipse high up in Teton Village, Wyoming.

He and other members of the San Francisco Amateur Astronomers booked the trip two years ago.

The weather forecast is a little more uncertain. Still, he remains excited for the celestial sight of a lifetime.

The next total solar eclipse in America is projected to be in 2024. It is expected to cut through Mexico and Texas and then pass through Maine and Canada.

We won't see a total solar eclipse in California until 2045.