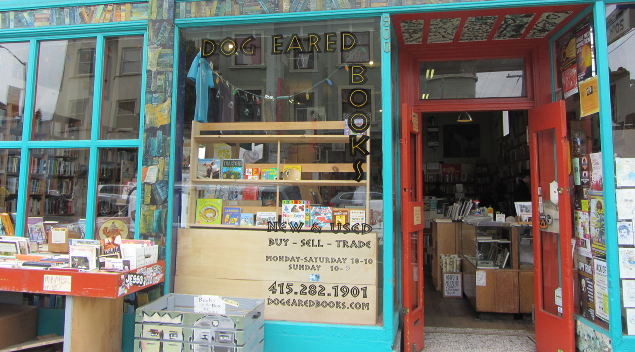 One of the best ways to celebrate Small Business Saturday is to visit a neighborhood bookstore such as Dog Eared Books. Located in a busy street corner in the Mission District, this independent bookstore has been serving its thriving community for nearly 25 years. Thousands of new and used books covering an extensive range of interests are neatly packed amongst the store shelves, with displays for best sellers and staff recommendations. Among the store specialties are local literature, beat, offbeat and small press.

Winner of a bevy of local awards, including Best Local Boutique, Ambiance San Francisco is easily one of the city's premier shopping destinations for women. But it's not just the incredible collection of chic clothing and fashion accessories that makes this small businesses so praised, it's also the stellar service that keeps customers coming back. Another indication of its widespread popularity is the opening of three other locations in addition to the original store founded more than 30 years ago just footsteps from the corner of Haight and Ashbury. Other locations are in some of San Francisco's most popular neighborhoods — the Inner Sunset, the Marina District and the newest location in Noe Valley.

There was a time when classic variety stores like Woolworth and Rasco were thriving in San Francisco. While those historic businesses have long disappeared from the city map, one family-owned business has survived, selling home improvement products, housewares, arts and crafts, games and a "variety" of other items. Located in the Castro District, Cliff's Variety was founded in 1936 by Hilario DeBaca, who sold items like cigars, toys, candy, magazines and greeting cards. Today, Cliff's is one of the city's oldest family-owned businesses and is operated by the founder's grandchildren. Hilario DeBaca is credited for hosting the Castro District's Halloween street party in 1946.

Whether you're an aspiring wizard or or you're already in the business, Misdirection is the most complete magic shop in the city. Located in the inner Sunset neighborhood just south of Golden Gate Park, Misdirections is led by San Francisco native Joe Pon, who founded the business over 17 years ago and reportedly began his interest in magic when he was just five years old. Inside the store, visitors will find everything from card tricks and money magic to books, magazines and DVDs on magic. Misdirections also hosts guest lectures, with recent appearances from Martin Lewis, whose list of awards include Magician of the Year and Lecturer of the Year, and Jay Sankey, a multitalented magician who has worked with the likes of Criss Angel, David Blaine and David Copperfield. Misdirections is a consistent award winner for Best Magic Shop in the Bay Area, including a nod this year as Best Magical Mystery Store from a leading local publication.

Union Square is all but certain to be packed with holiday shoppers over the busy Thanksgiving weekend. But one small business has been around longer than any of the rest in San Francisco's premier shopping destination. In fact, Shreve & Co. is the oldest commercial business in the city, first opening its doors to the public during the California Gold Rush in 1852 and not far from its current location. Shreve & Co. offers than 50 jewelry designers such as John Hardy and Penny Preville and timepiece masters like Breitling, Omega, Patek Phillippe and Rolex. The landmark jewelry store also specializes in engagement and wedding rings.

Related: Guide To A Long Weekend In San Francisco