MODESTO (CBS13) - Three Good Samaritans are seen on video jumping in to help an officer. Gaining control was the only thing on Yajaira Tapia's mind Tuesday when she saw a Modesto police officer fighting for his life. 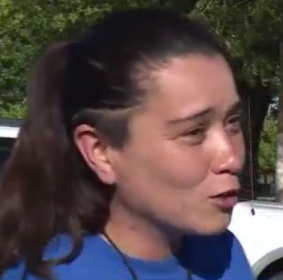 In a split second, Tapia, who was outside the Star Food and Liquor store, saw the initial struggle and ran to help -- even before hearing the officer's plea.

Security video shows her running from the sidewalk. That's when she grabs the man -- seeing he already had the officer's gun halfway out the officer's holster.

"I knew, halfway there, that this could be it," said Tapia. "I grabbed him by the face and neck and grabbed him with my other hand his shirt and yanked him down," she explained.

At the same time, video shows two men jump in to help and pin the man, identified by police as 31-year old Daniel Steffens, down to the ground.

Modesto police say the officer was investigating a possible car break-in, and when the officer tried to pat down Steffens, that's when they say Steffens started resisting.

"He had a purpose, he had a reason to get the gun out of the holster. So, let that happen and I was right in front of him," said Tapia.

Tapia says she felt like time was going in slow motion and that the struggle lasted for around five minutes. In reality, the officer was struggling for 45 seconds alone before Tapia and others took control. It took one minute to subdue Steffens.

"I wasn't scared at all in the moment, but after everything was done, my knees were shaking," explained Tapia.

The bystanders brawled, risking their own lives to help an officer in need.

"I just pray and hope that people would be inspired and want to help and know that good prevails," she said.