PLACERVILLE (CBS13) — A group of locals in Placerville, the city known for its historic charm, is now making history of its own calling for nearly the entire city council to be removed.

"It seems like it is just this cronyism and they just work in lockstep with each other," explained Mandi Rodriguez. "It's a failure to follow a process that really frustrates us locals."

Rodriguez, the recall organizer, believes the council is acting without listening to community concerns including a concept to revamp the Arts and Cultural Building into an Arts District, changing the look of Main Street.

"Once we saw the drawings of what their vision was, it was like 'Woah, that doesn't even look anything like the town we live in and love,' " she explained.

Rodriguez said there are many issues that drove her to form a petition for recall. Critics of council site issues including failure to protect the city's existing history and heritage, alleging the city is not following its own historic design standards among other things. 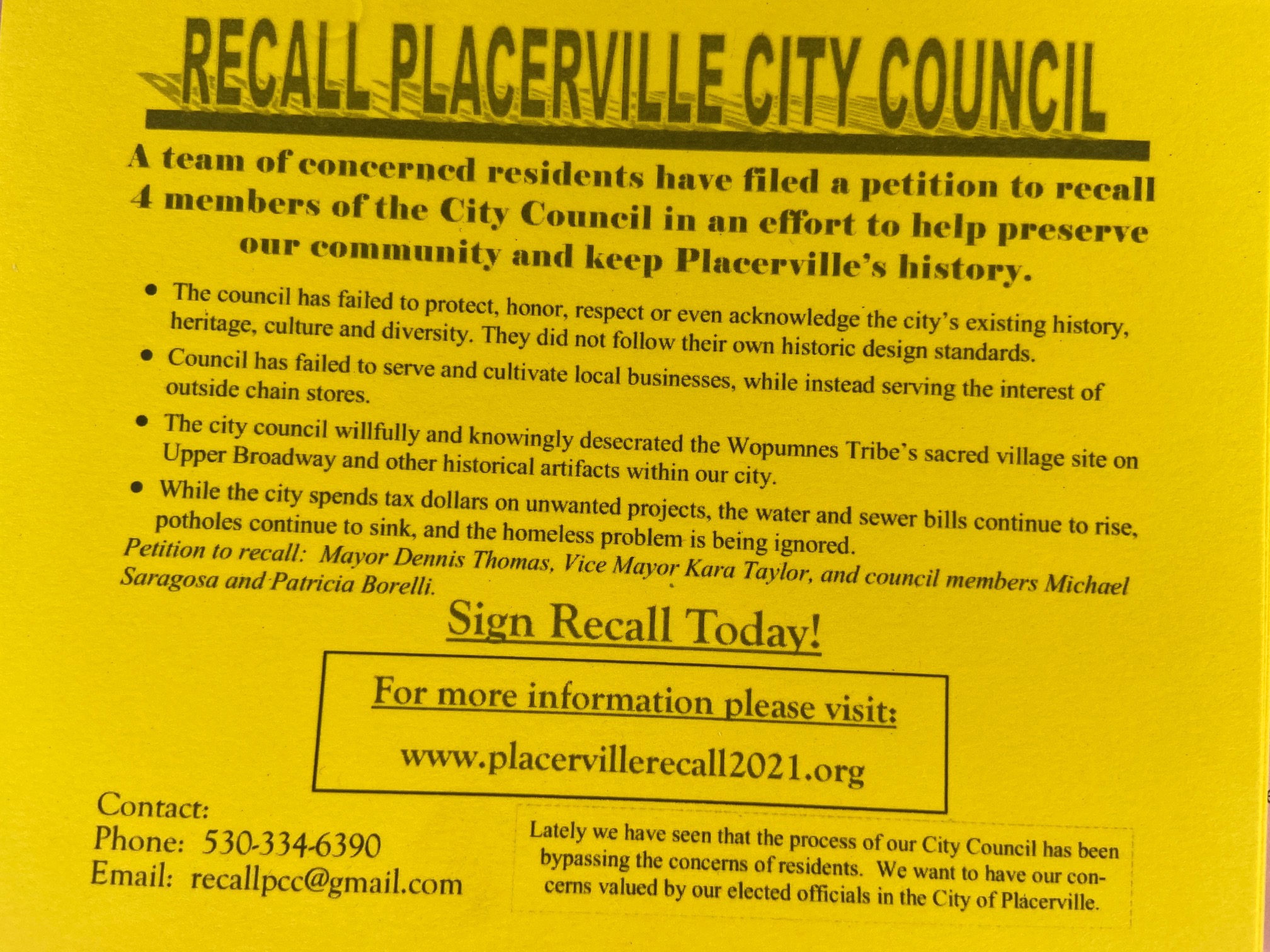 The petition effort calls for four out of five council members to be recalled including Michael Saragosa who was just re-elected in November.

"I think it's par for the course in today's political climate when somebody doesn't get their way," he said. "It seems like it is a performative action in that sense because I have not seen four out of five council members recalled anywhere."

The other three listed in the petition are Mayor Dennis Thomas, Vice Mayor Kara Taylor and Patricia Borelli.

Saragosa believes the recall is a reaction to the council's April unanimous vote to remove a noose on the city's logo and ode to the area's "Hangtown" nickname.

It's an effort he believes will not get to a ballot.

"We finished more capital improvements than we ever done last year. Sales tax revenue is up and we have a healthy reserve. So, we feel like we are on the right track," said Saragosa.

Organizers on the other hand who have gathered 100 signatures since Saturday are confident that they will succeed in gaining the 1,672 signatures needed to get on the ballot by the October 11th deadline. Rodriguez said they plan to go door to door to gather signatures. They also have a headquarters set up at 374 Main St where residents can sign the petitions.

"That's the power of a recall—is actually to is actually putting our local leaders, putting their feet to the fire and getting them to act on these issues that are so important to everyone here," said Rodriguez.

City Clerk Regina O'Connell explained that if the group gathers enough signatures for each of the four council members, she will then have to verify all the registered voters. If the group does not get the required number, the petition would be thrown out and the group would have to start the process over again.

Saragosa says if the group is successful, a recall election would likely happen next year and cost at least $13,000.