SACRAMENTO (CBS13) — After a horrific on-duty car crash, California Highway Patrol officer Mike Mitchell was given a choice: retire immediately, or earn your way back.

He lost his leg in 2011, but with determination and the help of technology, he's back in uniform patrolling the streets.

Now, with the help of a high-tech, bionic leg provided by the state, he's doing what many of us take for granted: walking.

"I'm walking on a computer that's a whole lot smarter than I am probably," he said, laughing. "It knows I want to do something. It knows when I want to move whether it's backward forward."

Mitchell severely injured his leg in 2011 in a horrible high-speed crash in Amador County. His cruiser slammed into a tree.

"I don't remember the collision," he said. "The in-car camera was destroyed in the collision. I had severe head injuries."

With his leg amputated in surgery, the CHP said he could either retire, or try to earn his job back with a computerized prosthetic leg. 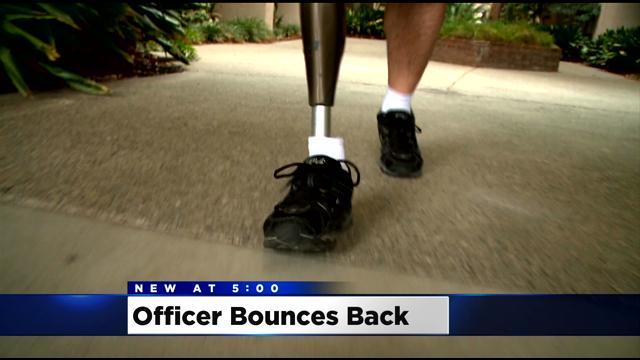 "I have kids at home and I can't let them see me quit," he said.

To keep his gun and badge, Mike went back through the academy, forced to prove he still had what it takes, treated like any other rookie.

Within months, he was back in uniform and in a CHP cruiser.

He says there are four full-time CHP officers who are also amputees.