5:45 The President has not called for the resignation of the Secret Service Director.

5:56 The Flyers can eliminate the Penguins from the NHL Playoffs tonight. 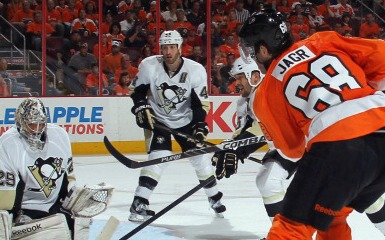 6:10 Credit card information has been stolen from customers at Ruby's Diner in Delaware County through their compromised computer system.

6:15 Mitt and Ann Romney answered questions from Diane Sawyer about driving with their dog on their roof again.

6:24 Mitt Romney has been offered the chance to host Saturday Night Live.

6:40 Chris talks to Larry O'Connor, Editor-in-Chief of Breitbart TV, about his exclusive interview with Mitt Romney.

7:41 Chris talks to Spike Eskin, the Sports Director for CBSPhilly.com, about the Eagles schedule that was released last night and the up-and-down opening of the Phillies season.

7:59 New Jersey Governor Chris Christie says he would listen if Mitt Romney asked him to be the Vice-Presidential nominee.

8:10 Chris talks to Editor of Philadelphia Magazine, Tom McGrath, about turning the old Philadelphia Inquirer building into a casino and Governor Tom Corbett's endorsement of Steve Welch for Senate.

8:25 The Obama campaign is planning to use Joe Biden to energize the youth vote.

8:30 Delta may be interested in buying the Sunoco oil refinery in Delaware County.