PHILADELPHIA (CBS) -- It's a story we know all too well in Philadelphia, but a Pulitzer prize-winning journalist has now put the whole Catholic priest sex scandal in one volume.

Mortal Sins (Sex, Crime and the Era of Catholic Scandal) is not simply a crime blotter but a sweeping tale of an institution seeing its towering moral authority threatening to crumble.

"The shocking thing is that this has gone on for so long," says author Michael D'Antonio.  "This is three decades of horror stories.""

D'Antonio's focus shifts from Rome to Washington to towns across the US (including Philadelphia) and Europe, from meetings of top church officials to the anguished voices of victims.

In the end, D'Antonio says, this is a story of hope.

"People are safer.  Kids are safer today than they would have been thirty years ago," he tells KYW Newsradio.  "And although the truth hurts, it's also very liberating, and I think that's the inspirational part of the book."

D'Antonio cites the Philadelphia DA's office as being especially relentless in pursuit of pedophile priests. 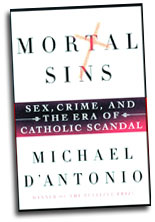 The US has had more than 16,000 credible accusations against 6,000 priests.  Critics say D'Antonio gets some facts wrong and buys into an anti-church bias in what they call the "abuse industry."

More information about the book is at michaeldantonio.net.