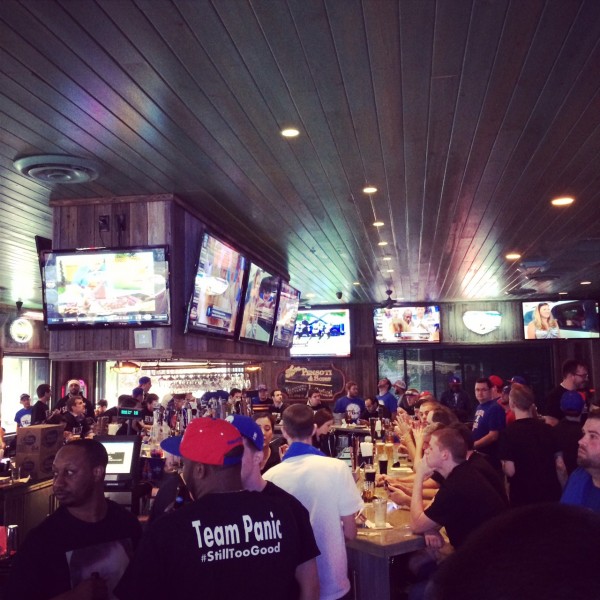 The event was hosted by 94WIP's Spike Eskin, who among others, helped Liberty Ballers promote this draft lottery watch party. CheesesteakTees were on hand giving out Sam Hinkie shirts and the Sixers donated some gorgeous snap back hats and blue Sixers t-shirts that were distributed as well on a first-come, first-served basis. Of course, not everyone got a shirt or a hat because no one expected that kind of turn out. Not me, not Eskin, not Liberty Ballers, not the Sixers, and definitely not Miller's Ale House and their servers.

The cameras were out, as Sixers.com and Comcast SportsNet were filming the event. It was a mad house.

Chants of "And-rew Wigg-ins" and "Let's Go Sixers" flooded the outdoor section of the sports bar. When the camera panned over the face of Sixers draft lottery representative, the great Julius Erving, the crowd would erupt. When the camera panned over any other person, team, or literally anything else, the crowd booed (insert your cliche Philadelphia sports fan comment here).

As the draft lottery approached and drew closer, the drama built. The angst grew. The suspense mounted. Finger-nails were bitten. Faces were buried in hands. Sweaty die-hard Sixersfans were everywhere, yes about 200 of them, all now fixated on the TV watching in unison.

Nerves turned to relief when the Sixers logo was shown in the 10th slot as they were awarded New Orleans' first-round pick.

Then, we were down to the fifth pick. Chants of "NO, NO, NO, NO" ensued, as Sixers fans hoped for the first overall pick. The fifth pick goes to the Utah Jazz. Phew.

The fourth pick goes to the Orlando Magic and sheer jubilation ensued, as Sixers fans were assured a top-three selection.

That was that. The Sixers ended up with the number three and number 10 picks in the first-round of the 2014 draft. As most Sixers fans began to cope with the fact that Wiggins will likely not be a Sixer, many remained optimistic. With two top-ten selections in the 2014 draft, the 2013 NBA rookie of the year in Michael Carter-Williams, the sixth overall pick in the 2013 draft—Nerlens Noel—who did not play a game yet, a ton of cap space, and a seemingly intelligent front-office, Sixers fans have a ton to be optimistic about it.

From the turnout exhibited during Tuesday night's draft lottery party, you can sense Philadelphia is itching to get excited about basketball.