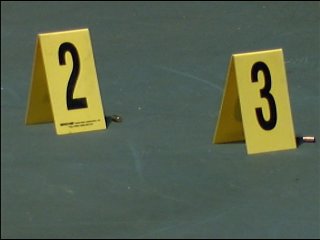 PHILADELPHIA (CBS) – Philadelphia police are investigating a violent night in which 10 people were shot in the span of six hours.

The violence began before 9 p.m. when six innocent bystanders were shot during a basketball game in Southwest Philadelphia. The shooting happened at the Kingsessing Recreational Center near 51st Street and Chester Avenue.

All six victims were taken to the Hospital of the University of Pennsylvania. Five of them are listed in stable condition and one person is in critical condition.

Also before 9 p.m., a 23-year-old male was shot twice during a robbery at 8th and Butler Streets in the city's Hunting Park section. The victim was taken to Temple University where he is listed in critical condition. Police are currently searching for two gunmen.

Just after 9 p.m., a 29-year-old male was shot multiples times in the 1600 block of Dyre Street in the city's Frankford section. The victim was taken to Aria Health's Torresdale Hospital in stable condition. No arrests have been made.

Around 9:30 p.m., a 22-year-old was shot in the 100 block of N. Millick Street in West Philadelphia. Police say the suspect fired into a crowd during a large fight. The victim was taken to the Hospital of the University of Pennsylvania in critical condition.

Finally, around 2:30 a.m., a homeowner was shot during a home invasion in the 200 block of Ruscomb Street in the city's Olney section. Police say three suspects broke into a home and shot the homeowner, who was sleeping on the couch. The victim is in critical condition at Albert Einstein Medical Center. Police say the suspects also shot and killed one of the homeowner's dogs.