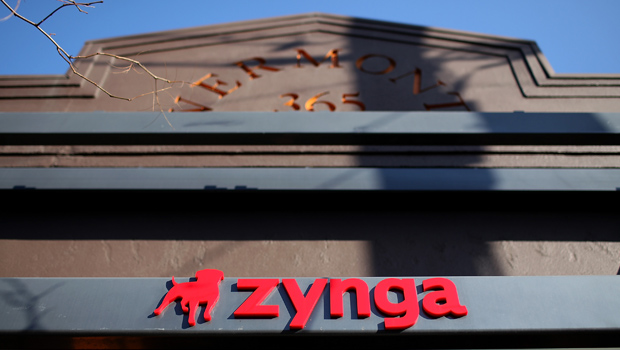 NEW YORK Zynga (ZNGA) booked a loss in the third quarter due largely to a charge marking down the value of a mobile game company it acquired in March.

The San Francisco company's revenue topped analyst expectations, and it also signed a deal to offer online poker and casino games, played with real money, in the U.K.

The online game maker said Wednesday that it lost $52.7 million, or 7 cents per share, in the July-September period. That's down from earnings of $12.5 million - break-even on a per-share basis - from a year earlier, when it was still privately held.

Zynga, which is trying to convince investors that it can revive growth, also signed a deal to offer online poker and casino games, played with real money, in the U.K. It plans to launch those games in the first half of 2013.

The results come a day after Zynga announced that it will lay off workers for the first time. The company is cutting about 150 jobs, or about 5 percent of its workforce of 3,200. It's also closing studios and killing off some games to cut costs.

In another attempt to appease investors, Zynga also said it will repurchase up to $200 million of its shares. Buybacks increase the value of the remaining shares traded on the stock market and can lift per-share earnings since results are divided among fewer shares.

Shares of the San Francisco-based company jumped 29 cents, nearly 14 percent, to $2.42 in after-hours trading. The stock had closed down 7 cents at $2.13, hitting an all-time low of $2.10 earlier in the day. Zynga's stock began trading in December after pricing at $10 in its initial public stock offering.