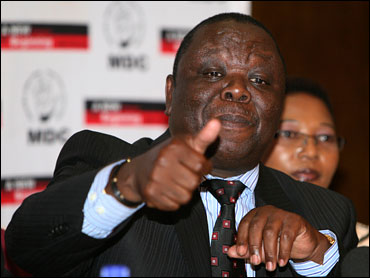 Zimbabwean Prime Minister Morgan Tsvangirai was injured in a car crash on the outskirts of the capital Friday and his wife was killed, officials said.

Tsvangirai had been traveling to a weekend rally in the prime minister's home region, south of Harare, when their car sideswiped a truck, his spokesman James Maridadi said. No other details on the crash were immediately available.

Maridadi initially said the injuries to the Tsvangirais and an aide who also was in the car were not life-threatening. Later, two officials from the Movement for Democratic Change party told The Associated Press on condition of anonymity that 50-year-old Susan Tsvangirai was dead and that an official statement would come later from the family.

Finance Minister Tendai Biti, Tsvangirai's No. 2 in the party, told reporters after visiting the Harare hospital where the crash victims were taken that the prime minister was stable. Biti refused to answer questions about Susan Tsvangirai's condition.

Earlier, British Prime Minister Gordon Brown had sent his condolences to Morgan Tsvangirai. A Foreign Office spokeswoman said the British government was "deeply saddened to hear news of Susan Tsvangirai's death and we offer our condolences."

The Tsvangirais, who married in 1978 and had six children, often went together to political events, but she did not have a prominent public role.

President Robert Mugabe arrived at the hospital late in the evening, spent about an hour inside and left. He and other senior aides who also visited did not speak to reporters or Tsvangirai supporters gathered outside.

The road where the accident occurred is like many in Zimbabwe - in poor condition because of a lack of maintenance - and is notorious for accidents. Long stretches have been reduced to one lane.

State television canceled its first evening newscast without explanation and reported nothing about the accident in its second.

Tsvangirai, who turns 57 next week, was sworn in Feb. 11 as Zimbabwe's prime minister in a power-sharing deal meant to end almost a year of deadly stalemate with Mugabe. The unity government has been rocky after years of rivalry between Tsvangirai, a former trade union leader, and Mugabe, in power since independence from Britain in 1980.

Tsvangirai formed his Movement for Democratic Change a decade ago. As it emerged as a serious political challenger, Tsvangirai repeatedly faced the wrath of Mugabe's ZANU-PF, Tsvangirai has been beaten and was once nearly thrown from a 10th floor window by suspected government thugs.

Scores of Tsvangirai supporters were in prison even as he joined the government. Several have since been released, but not prominent party member Roy Bennett.

Bennett, Tsvangirai's nominee for deputy agriculture minister, has been jailed since Feb. 13. He faces weapons charges linked to long-discredited claims Tsvangirai's party was plotting to use force to overthrow Mugabe.

Bennett's lawyers had hoped he would be freed Wednesday, after the High Court ruled the state had no right to oppose bail. Prosecutors have appealed the bail ruling and state TV reported Friday that a magistrate had been taken into custody for "alleged abuse of office" for signing a release order for Bennett based on the High Court ruling.

State TV quoted police as saying the release order should not have been signed while the Supreme Court was considering the bail ruling.

Zimbabwe has the world's highest official inflation rate, a hunger crisis that has left most of its people dependent on foreign handouts and a cholera epidemic blamed on the collapse of a once-enviable health and sanitation system. Cholera has sickened more than 80,000 and killed more than 3,800 people since August.