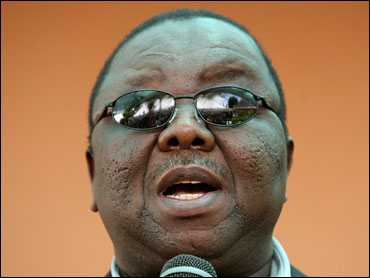 Zimbabwe's prime minister said Monday he did not suspect foul play was involved in a car crash that killed his wife and injured him.

Zimbabwe's long history of political violence blamed on President Robert Mugabe's forces - including several assassination attempts on Tsvangirai - has fueled speculation that the crash was not an accident.

But Tsvangirai told supporters "in this case I want to say there is no foul play. It was an accident."

The couple's four-wheel-drive vehicle collided with a truck carrying U.S. aid on the outskirts of the capital on a notoriously dangerous road.

State television said the truck swerved on an uneven stretch of the road, which, like many in Zimbabwe, is poorly maintained.

Tsvangirai's spokesman said the car carrying the prime minister, his wife, a driver and a bodyguard sideswiped the truck and rolled at least three times.

The driver of the truck was expected to appear in court later Monday.

A rally in honor of Susan Tsvangirai will be held Tuesday on the prime minister's 57th birthday. The funeral will take place on Wednesday. The couple had been married for more than three decades and had six children together.