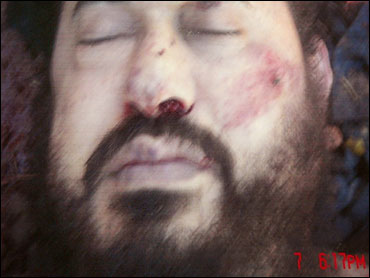 Described in the message as a "beloved brother with holy war experience and a strong footing in knowledge," Abu Hamza al-Muhajer is almost certainly an alias, reports CBS News correspondent Elizabeth Palmer, and so far no one seems to know much about him or whether he's an Iraqi or another foreign fighter like Zarqawi.

"Al Qaeda in Iraq's council has agreed on Sheik Abu Hamza al-Muhajer to be the successor for Abu Musab al-Zarqawi in the leadership of the organization," said a statement signed by the group on an Islamic militant Web forum where it often posts messages.

The authenticity of the statement could not be independently confirmed.

Earlier Monday, a U.S. military doctor said that al-Zarqawi died 52 minutes after an air strike against his safe house northeast of Baghdad and that an autopsy showed his injuries were consistent with those caused by a bomb blast.

"Blast waves from the two bombs caused tearing, bruising of the lungs, and bleeding," Jones said.

"We have clear evidence that he died of blast injuries. There is no evidence to suggest that he was beaten, and I have no reason to suspect that that happened."

The al Qaeda in Iraq leader also suffered head and facial wounds, bleeding in his ears and a fracture of his lower right leg.

Maj. Gen William Caldwell, a spokesman for the U.S. military in Baghdad, said an F-16 dropped a 500-pound bomb on the house at 6:12 p.m. Wednesday. A second bomb followed immediately after.

U.S. troops arrived at 6:40 p.m. and found Iraqi police at the site. He said a coalition medic treated al-Zarqawi, who lapsed in and out of consciousness.

"It was evident he had massive internal injuries," Caldwell said.

He added that no decision had been made on what to do with the remains of al-Zarqawi and Rahman.

"These autopsies were performed to make a definitive determination as to the cause of both Zarqawi's and Rahman's deaths," Caldwell said. "The scientific facts provide irrefutable evidence regarding the deaths of terrorists will serve to counter speculation, misinformation and propaganda."

The airstrike killed another man, two women and girl between the ages of 5 and 7 who were in the house.

Zarqawi's killing has meant a wartime windfall for the coalition forces, reports Palmer. In the past 48 hours, the U.S. military announced it has carried out 140 major operations, killed 32 insurgents and detained 178, including one described as a high-value target with a $50,000 price on his head.

An Iraqi man who was one of the first people on the scene of the U.S. air strike targeting al-Zarqawi said he saw American troops beating a man who had a beard like the al Qaeda leader.

No other witnesses have come forward to corroborate the Iraqi man's account that al-Zarqawi was beaten.