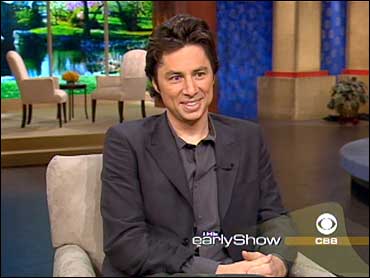 Actor Zach Braff impressed critics with his performance in "Garden State," a film he wrote and directed.

After that, he said he became a hot commodity in Hollywood and was pitched "by-the-numbers romantic comedies" over and over again. But he waited for something he really thought was worth it. He found that in his new film "The Last Kiss."

Braff, best known for starring on the hit TV comedy "Scrubs" and said he was having so much fun doing the show that he felt no pressure to make an other film. But this one, he told The Early Show, is exciting for him.

"I just thought it was a gritty, honest, real take on the average anxiety people in their 20s and 30s have about settling down for the rest of their lives," he said.

This film examines Braff's relationship with his girlfriend, who gets pregnant and wants to buy a house.

"He loves her and he's 99 percent sure she's the one but he has that fear," said Braff, who is 31. "I come from a generation of people whose parents, for the most part, got divorced. Now that this generation is reaching marriage age they have extra anxiety about settling down."

Braff said the fear of getting married is something very real for his contemporaries. In the movie, his character tells his girlfriend that he will marry her when she names three couples who have lasted more than five years — and she couldn't do it. "Braff said his real life friends couldn't do it, either. Despite that, Braff said he holds out hope for marriage.

"I want to get married and have kids and do the whole thing, but I think it's this pink elephant we don't talk about in the room," he said. "How come people can't stay together? And Paul Haggis (the film's writer), who wrote 'Crash' and 'Million Dollar Baby,' has an ability to take apart things and puts it on the relationships."

The movie, Braff said, contains a little bit of everything from comedy to touching scenes to screaming matches, which gave the actor a chance to stretch himself. Some have compared him to Tom Hanks.

"What I like about Tom Hanks is he's someone who started in TV, and then grew to a very, very successful movie career," Braff said. "I can only hope for a fraction of his success."

There have been reports that this may be Braff's last season on "Scrubs." He said he is not sure what his next move will be, but said he is sure that "Scrubs" could go on a long time with or without him.