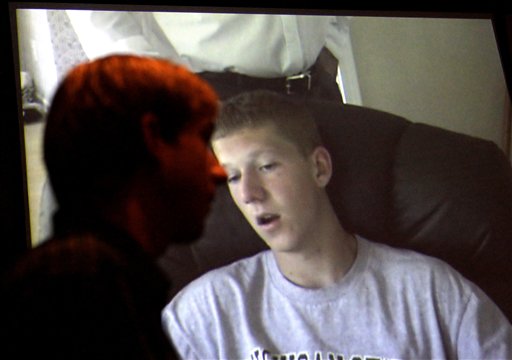 The topic of suicide makes many people squirm. It's something we've been told we're not supposed to talk about. If you speak it, someone might do it.

But there's a growing conversation about suicide that's happening on college campuses, in high school auditoriums and online _ even among youth some might think are too young to consider suicide. The hope is that a public discussion between young people and the teachers and counselors who work with them could inspire peers in distress to get help.

"It's kind of like the sex talk with your children. I think that we should have that talk," says Brittany Langstaff, a 14-year-old ninth-grader in Georgetown, Ontario. She's on the girls editorial board of New Moon Girl Media, a magazine with an online site aimed at teen and "tween" girls that recently took on the topic of suicide. Features on the site include advice from experts about how to deal with suicidal thoughts and a chance for young readers to discuss the topic online in a moderated space.

Nancy Gruver, New Moon's Minnesota-based founder and CEO, knew that addressing suicide with this age group might raise a few eyebrows. But she often sees the topic come up in the site's online chat and in letters, poetry and artwork submitted by its young members, prompting a policy that requires staff to contact a parent when that happens.

"This should not be taboo. It should be talked about because it is something that affects kids in this age range," Gruver says.

It wasn't always that way. Sixty years ago, World Health Organization statistics show that suicide was much more common among the elderly. Since then, it has shifted to become a much more common cause of death among younger populations _ and the third leading cause of death among 10- to 14-year-olds in this country by 1997, according to one report in the medical journal Pediatrics.

In a Centers for Disease Control survey of high school students from 2007, the most recent federal data of its kind, researchers found that 16 percent had seriously considered suicide in the months preceding the survey. Similarly, a University of Minnesota study released this year found that nearly 15 percent of teens think they're going to die young, leading many to attempt suicide, use drugs and engage in other unsafe behaviors.

Bryce Mackie, a 21-year-old student at Columbia College in Chicago, knows all about that. In high school, he made a film about his own experience with bipolar disorder and suicidal thoughts. He first showed the film to his parents and teachers and ended up getting help, and now speaks to other young people across the country about his experience.

"I'll have seven or eight kids after a speech come up to me and, for most of them, this is the first time they've talked about it," says Mackie, whose film "Eternal High" has won awards for helping destigmatize mental illness.

That's no longer the case at every school. Some in the mental health field credit Dr. David Satcher, a former U.S. surgeon general, for setting the stage for more openness in his 2001 National Strategy for Suicide Prevention.

Now some states, among them California, New Jersey and Tennessee, require a strategy for suicide prevention in schools. A few suicide prevention organizations, including SAVE (Suicide Awareness Voices of Education), also have developed curriculum to aid those educators. It's a good start, says Dan Reidenberg, SAVE's executive director.

"And yet we still have schools every single day where there's a suicide and they won't respond at all," he says. "And that's a really big problem."

Often, it's more common for the conversation to happen on college campuses.

Last month at the University of Connecticut, students and faculty wore suicie prevention T-shirts, invited speakers to campus and planted hundreds of flags to represent the nearly 1,200 college student suicides that happen each year.

Other young people have made their efforts a year-round endeavor.

Last year, students at Baylor University started the Alive Campaign with a bike ride from Texas to Alaska with a friend who had attempted suicide. They made stops along the way at colleges, churches and community gatherings to host talks about suicide and continue those efforts today.

Jamie Tworkowski, 29, was inspired to action by a suicidal friend who told him she was cutting herself and using drugs. A story he wrote about her ultimately helped save her life and resulted in a Florida-based nonprofit called To Write Love On Her Arms.

Tworkowski posted the story about his friend on the MySpace social networking site in 2006 and sold T-shirts to raise money for her treatment. After another friend who played in a band wore one of the shirts during a performance, he says he received more than 100 online messages, many from young people who said they were depressed or suicidal. Now his organization, which has eight full-time staffers and five volunteer interns, uses social networking to put people suffering from depression in contact with professionals.

"It made me realize, OK if a hundred people respond this way, why wouldn't 100,000 or even a million respond this way?" Tworkowski says. "There was this need to talk about it."

Talking openly about suicide can still be tricky, especially in the media.

Joseph Bustos, a reporter in Sterling, Ill., discovered that when his editor asked him to check into a local teen's recent suicide. There was a time when newspapers didn't run stories on suicide, or even mention it as a cause of death in obituaries. But the teen's family agreed to talk _ and the story about her, and her family's grief, ran on the front page.

"As a paper, we wanted to reflect what everyone was talking about," says Bustos, who works for Sauk Valley Newspapers. He says he also wanted to see if "anything positive could come of it," and included a list of suicide resources.

Bustos said the comments he got from readers were positive, though the schools superintendent dropped off a copy of nationally recognized media guidelines for covering suicide. Among them was a suggestion to avoid putting stories about a particular suicide on the front page.

Mental health experts worry about coverage that pays homage to a person who takes his or her own life, because research has shown that it can encourage others, especially teens, to do the same. But there is middle ground.

"We have to be careful about doing things that inadvertently glorify suicide," says Alec Miller, chief of the child and adolescent psychology department at Montefiore Medical Center in New York. "But at the same time, we don't want to conceal it and pretend like it didn't happen."

Martha Irvine is an AP national writer. She can be reached at mirvine(at)ap.org or via http://twitter.com/irvineap