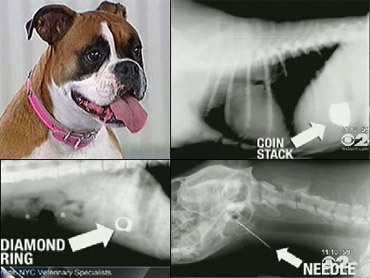 The dog ate my homework and that was just for starters. Shocking X-rays reveal the strange things that wind up in the stomachs of our pets, reports CBS-2's Dave Carlin.

CBS 2 got the inside story. At the Dewitt Clinton Dog Run on Manhattan's West Side we met dog owners with "tails" to tell.

Carol Sumner's beagle "Snoopy," "ate half of a rubber ball once," she said. "I was just hoping it didn't get stuck there but fortunately it came out."

Kevin Jenkins, whose dog is named "Arnold" said, "He eats paper towels for some reason. He's obsessed with them."

Veterinarian Amy Zalcman is an expert in figuring out the unusual things canines and cats consume. Showing us a series of 10 X-rays, we saw that dogs are often money hungry. One dog had swallowed a stack of coins.

"The penny when it gets digested can cause trouble with their red cells and the red cells get destroyed," she said.

CBS 2 HD was shown the X-ray of a Bull Terrier puppy who ate a kitchen knife and survived.

So did a cat that swallowed a needle, which was lodged at the back of the throat. The surgery to remove it took place before the needle traveled to the cat's brain.

Other X-rays revealed a tiny metal engine from a toy car, a pencil, earrings, a collection of rocks and more.

Making his CBS 2 HD debut was my own dog, "Lou." Lou likes rip the stuffing from his dog toys, which is a dangerous habit because the material he ingests could cause obstructions and they won't show up on X-rays.

That is also true of other things dogs like to eat, namely socks and underwear.

You may say "not MY pet," but remember they will never confess. The X-rays, however, never lie.