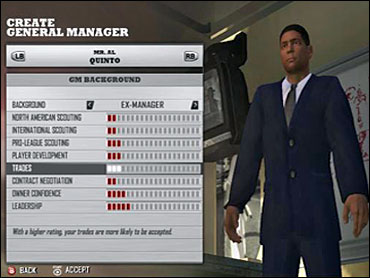 For the countless of devotees of rotisserie and fantasy baseball, there's a whole new game in town.

On Tuesday, 2K Sports will release its MLB Front Office Manager, and for those addicted to the stat-heavy pastime of running fantasy leagues, being a Major League Baseball general manager may never get closer.

The new game -- which is unlike any baseball video game I've ever seen -- has perhaps the perfect pitchman, Oakland A's General Manager Billy Beane. For those not familiar with him, the game probably won't mean much, since as the main subject of Michael Lewis' hit book, "Moneyball," Beane has long been considered the most cerebral and efficient guy putting contending baseball teams on the field.

There is no end to the roster of baseball video games that pay homage to the complexities of building a team from the ground up. They have mechanisms for relying on stats to determine which players are best in different kinds of situations -- and many have had the endorsement of real-life players and the blessing of big league baseball.

But MLB Front Office Manager isn't like any of them. That's because the game is really about the process of running a team rather than the play-by-play action in which gamers have to swing at pitches, try to dive in the hole for sharp-hit grounders, and master all kinds of joystick button combinations in order to steal a base or pick someone off first.

The new 2K Sports game puts all the focus on what it takes to get a major league team going, and operates on a calendar that begins the moment the World Series ends and commences from there. That's because that's how it really is for each of the real-world big league general managers.

By bringing in Beane as the game's celebrity spokesperson, 2K Sports is making a big bet that the baseball stat-heads out there will jump at the chance to impersonate Beane, instead of the more common video game proposition of taking on the role of big league players and swinging for the fences.

MLB Front Office Manager is all about trying to navigate the millions of little details that go into the operational side of running a baseball team. From scouting amateur players to drafting them to making trades to figuring out what to do when stars get injured to sucking it up after a losing season and trying again next year.

The structure of the game is to go through a 30-year general manager's career, trying to position yourself as a Hall of Fame candidate. And instead of playing out each individual contest in each season, pitch by pitch, this game is about making the behind-the-scenes decisions that put your team in position to outplay others in simulated game after simulated game.

And that means that the action is entirely about figuring out how to run the front office -- something that really hasn't been tried in a modern baseball video game.

"If it's possible, on an Xbox or PlayStation or PC, in a game to re-create the general manager's position," said Beane, "I don't know that you can find anything that duplicates it better than this. This is the ultimate fantasy player's outlet, because every decision, just like as with a real general manager, every decision costs something and is going to prevent you from doing something else. In most games, you draft anybody you want...This actually takes into account the depths of the game."

Indeed, as with the day-to-day responsibilities of real-life baseball general managers, this game is all about resource allocation. Players have limited budgets and have to decide where, and how, to spend. Every dollar spent on a hot free agent is a dollar less to spend on bench depth, or scouts capable of finding future stars in the sandlots of the Dominican Republic.

"It's a thinking man's baseball game," said Edwin Loo, the game's producer at developer Blue Castle Games. "It's for all those people who play fantasy baseball (and who) spend hours making (their teams and making trades). That's who we made this game for. This game is for those hard-core baseball fans."

Some of the elements of the game involve daily briefs on happenings around the big leagues. Players will see trades made by other teams--simulated in a single-player run-through of the game, or for real in online league play.

They will also be able to examine their own teams' rosters, determine trades they'd like to make with other teams, and then attempt to make those trades.

Of course, as in real baseball, successfully pulling off trades is tricky business. And that's one of the areas where Beane's expertise came into play: helping the game's designers build in an appropriate level of difficulty for achieving things like trades. Otherwise, it would all be too easy.

"A lot of the time (I spent) was really figuring out what would be the verbiage when talking about trades," Beane said. "They aren't as easy as just calling this guy and saying, 'Will this trade work?' It can be a frustrating process, and you can't think of it as a linear process."

The game also offers regular e-mail communications--tips, in other words -- from an all-seeing Beane operating behind the curtain. And the language of these communications was another time-consuming piece Beane's role in consulting on the creation of the game.

Beane -- who admitted he is a big gamer himself, with a small obsession with games like Call of Duty and Age of Empires -- said that he also put a lot of effort into helping to make sure that the game's rules adhered as closely as possible to that of the real big leagues.

Throughout the game, players will encounter situations where they have to use their brains -- instead of just the quickness of their thumbs on joystick buttons -- to succeed. Whether it's intelligently negotiating a young shortstop's contract, or putting enough emphasis on scouting to be able to draft well for next season, this is not your son's baseball video game. This is, as Loo said, a thinking person's game, and one that evolves slowly, and methodically.

In fact, players have very little control over the actual play-by-play of each individual contest. Instead, they watch as the game's simulation engine runs through, say, a Red Sox-Tigers matchup. There are ways to control some of the action, but there is none of the hitting, pitching, or fielding involved in most baseball games.

That means this game is not going to appeal to a large, mainstream audience. It is definitely a niche title. On the other hand, there are millions of fantasy league and rotisserie players, and MLB Front Office Manager is clearly aiming at picking off their business. Whether that will happen is impossible to know at this point, but if one thing is for sure, it's that those who get a serious kick out of poring over baseball stats, transactions, standings and off season news could finally have a way to dive deep into the fantasy of being Billy Beane.

Of course, there is a cost to playing this game the way the designers want you to, given that it's supposed to be a 30-year career simulation.

"You choose the type of clothes you wear" as a GM, joked Beane, "and you choose who you are. Over 30 years, you lose your hair, and you put on weight as you do this job."

On the other hand, he said, the game is realistic enough, and teaches so much about the minutiae of running a baseball team that, "It wouldn't surprise me if the next generation of baseball general managers grow up playing this game."