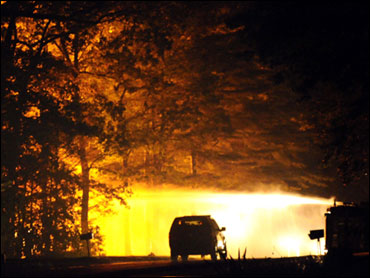 SOUTH WINDSOR, Connecticut (AP) An advertising executive, who snatched his ex-wife from a parking lot, held her hostage for hours during a standoff with police and then refused to leave their burning home, finally surrendered when flames made their way to the basement where he was hiding, authorities said.

Richard Shenkman was taken by ambulance away from the gutted remains of the South Windsor home early Wednesday, police Cmdr. Matthew Reed said. Shenkman likely would face charges including kidnapping and arson, he said.

The dramatic ending came more than 12 hours after police said Shenkman missed a Tuesday morning court hearing in his contentious divorce and abducted Tyler from a lot in downtown Hartford.

Shenkman kept police at bay for hours by saying he had booby-trapped the house with explosives. Tyler escaped Tuesday night, and police cut power to the suburban Hartford neighbourhood of well-maintained homes amid several dozen gunshots and explosions. A fire ignited and quickly engulfed the house as police urged Shenkman to come out.

The fire likely began inside the house, Reed said. Tear gas canisters and flash grenades fired by police into the house were not flammable, he said.

A bomb squad was on the scene after the standoff began Tuesday morning. Police blocked off streets near the home Shenkman and Tyler used to share, and negotiators talked to them.

Tyler is a medical malpractice lawyer who worked for Shenkman's advertising firm in Bloomfield, according to divorce records. The firm produced "The Gayle King Show," hosted by Oprah Winfrey's best friend and did commercials for state government, the records say.

During the standoff, a local newspaper reported that Shenkman had given it a list of demands, including that a priest be brought to the house to give Tyler her last rites.

Reed said there was no confirmation of explosives in the house even though there were indications, such as "some wires and some other odd items."

Shenkman made several demands, said Reed, who would not elaborate. The Day newspaper, of New London, reported they included summoning the priest and asking that Judge Jorge Simon, who presided over the couple's divorce case, remarry them. It reported he also asked that police "back off the property," which he said they did.

Shenkman, 60, and Tyler, 57, have shared three years of contentious divorce proceedings, Shenkman's attorney Hugh Keefe said. They married in 1993; a judge granted the divorce last year, but Shenkman has been appealing.

The state appellate court, in a decision released Tuesday, rejected Shenkman's appeal. Shenkman had sought to delay the divorce proceedings until an arson case against him was resolved.

He is accused of burning the couple's beach home in East Lyme in 2007 hours before he was to hand it over to Tyler. The case is pending in New London Superior Court.

Shenkman also has other pending criminal charges, including threatening, violating a protective order and forgery, according to the state Judicial Branch.

"The reports that he abducted Ms. Tyler ... is consistent with the level of irrationality that he displayed throughout the proceedings," Pattis said.

The couple's Appellate Court file includes a cassette tape of more than a dozen voice mail messages from Shenkman to Tyler, which contain numerous threats.

Shortly before the trial, the records show, Shenkman was hospitalized because his lawyer thought he might be a danger to himself.