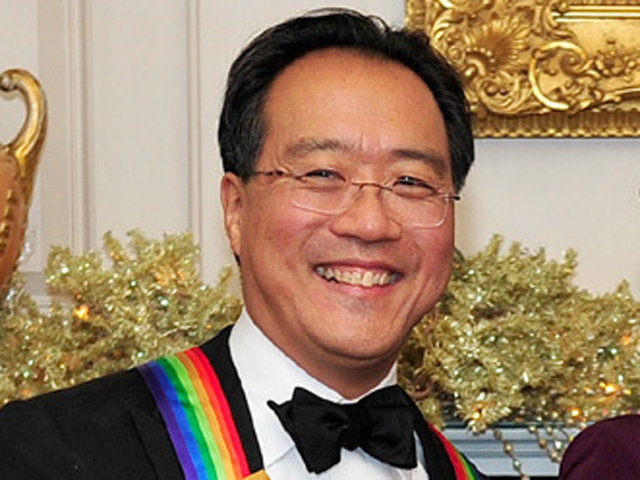 Legendary cellist Yo-Yo Ma has been creating beautiful music for nearly his entire life. His passion for artistic excellence was recently honored at this year's Kennedy Center Honors in Washington, D.C.

CBS' Julie Chen sat down with Ma for more on the honor and his long, illustrious career.

Ma is perhaps the most recognized classical performer, captivating the world with his talent, heart and joy.

When asked what he enjoys about being a musician, he says it's that he never stops learning.

"You're trying to take something that is internal, a feeling, a memory, a thought, and making it live inside somebody else," Ma said.

The musician, who recently was honored at the White House, receiving the Presidential Medal of Freedom in February, picked up the cello at just 4 years old, even though the violin was his parents' first choice.

"I think the way I sounded on the violin was the way that fingernails on a chalkboard sound, you know, that awful, screeching sound. Didn't like it, didn't take to it," Ma said. "So they thought, 'The kid's not talented.' And then my big mistake was -- or my big opportunity was -- I saw a double bass when I was 4, like, this huge thing. And so you know, kids, fire trucks, large instruments, 'I want that.' (My parents said) 'You can't have that because it's too big.' (I said) 'I want the next biggest thing.' That was the cello. It was a compromise, you know, for a kid's imagination to want to play something large."

His father was his first teacher. At 5, he gave his first concert. A year later, the family moved from Paris to New York. At 7, the music prodigy played for President John F. Kennedy.

"I had a very focused childhood," Ma said. "You know, it was music, there were languages, there was, you know, theory, harmony."

But he wanted more, so he eventually left his intense music training and headed to Harvard.

"College was the place to kind of go and explore," Ma said.

And his exploring hasn't stopped. At age 56, Ma continues traveling the world as its musical ambassador.

At age 49, Ma said, he realized playing the cello was what he wanted to do with his life -- not something his family simply wanted for him.

When asked why so late in life, Ma quipped, "I'm a slow learner. ... It's when I realized that all the things I loved about life outside of music had to do with people. My interest in cultures and education and anthropology and just in the world actually could be fulfilled through doing music."

He had already created The Silk Road Ensemble, bringing together music from ancient routes, which inspired The Silk Road Project to promote innovation and learning through the arts

Through the years, he has also shown an incredible versatility of musical styles.

Speaking of music and its ability to unite people, Ma said, "It's really strange because, biologically, people have so much more in common than separate them. For some reason, we're always focused on the little, tiny differences and we blow it up to unbelievably huge proportions. ... So if there's a mechanism that we have that's coded either genetically or that we could actually do that actually brings people together and we see the commonalities, you know, I would go for that."

That mechanism of music and its power to bring people together has become Ma's life's work.

This United Nations Messenger of Peace is also a 16-time Grammy winner and now, a Kennedy Center honoree.

Ma said of the laurel, "This honor is bigger than what I can try and encapsulate. It's just something I can't even, you know, wrap my brain around."

You can see the Kennedy Center Honors this Tuesday night at 9/8c on CBS.