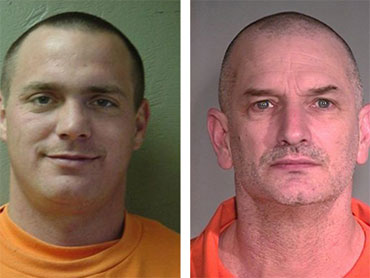 The search for two men who escaped from a private Arizona prison and their accomplice has turned to the vast Yellowstone National Park area after one of the inmates was linked to a double homicide in New Mexico.

The U.S. Marshals Service said Sunday information developed within the past two days indicates Tracy Province, John McCluskey and Casslyn Welch may be hiding in portions of the park that span Montana and Wyoming. The agency also said investigators believe Province has separated from McCluskey and Welch.

CBS News correspondent Ben Tracy reports that investigators believe one of them may be traveling in a 1997 platinum gold Nissan Sentra with Arizona license plate 620-PFV. There is a reward for information leading to their capture.

It doesn't appear any of the three are expert campers or have wilderness survival skills, said Thomas Henman, supervisory deputy with the U.S. Marshals Service in Phoenix.

"From the start, we believed these individuals would be staying at campgrounds and truck stops and other places like that. This keeps to that pattern," Henman said. He added authorities believe the three might be sticking to back roads and smaller state highways.

Federal investigators in Montana and Wyoming and law enforcement authorities with the National Park Service are working with investigators from Arizona to follow leads in the Yellowstone area.

The manhunt for the three intensified Saturday after forensic evidence linked at least one of the inmates to the killings of an Oklahoma couple who was traveling through eastern New Mexico earlier this week.

The badly burned skeletal remains of Linda and Gary Haas - both 61 - were found in a charred camper Wednesday morning on a remote ranch in Santa Rosa. The couple's pickup truck was found that afternoon 100 miles west in Albuquerque.

Tracy reports that Province, McCluskey and Daniel Renwick escaped from a medium-security prison in Arizona through a door that should have set off alarms, but didn't.

McCluskey's cousin Welch, who is also his fiance, helped them escape by throwing wire cutters over a fence. Authorities believe the two fugitives have split up and Welch is on the run with McCluskey.

The three later kidnapped two semi-truck drivers at gunpoint and used the big rig to get away, authorities said. The group left the drivers unharmed in the truck at a stop just off the freeway in Flagstaff and then fled.

Renwick was arrested Aug. 1 in Colorado.

Authorities said the movements of the two inmates and their accomplice have been unpredictable so they will continue with the nationwide manhunt until all three are arrested. Publicizing their photographs in newspapers and on television, including a segment Saturday night on "America's Most Wanted," has helped generate tips, investigators said.

A series of billboards featuring the three are also planned.