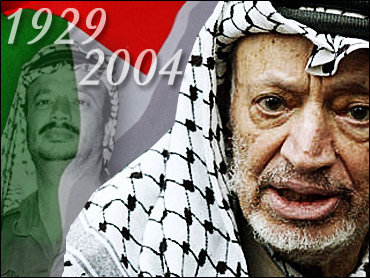 Yasser Arafat, who forced his people's plight into the world spotlight but failed to achieve his lifelong quest for Palestinian statehood, died early Thursday at age 75, after more than a week in a French hospital and several days in a coma.

Arafat was to the end a man of many mysteries and paradoxes - called everything from terrorist to statesman, autocrat and peacemaker - depending on who was talking, and when.

Bulldozers were at work clearing away debris from his grave site in his compound in Ramallah, reports CBS News Correspondent David Hawkins. The place that was once his prison will become his shrine.

Palestinians rushed into the streets of Gaza and the West Bank Thursday to mourn Yasser Arafat, clinging to flags, clutching his photograph and waving the trademark headscarf of the leader considered the national patriarch.

About six hours after Arafat's death was announced, the speaker of the Palestinian parliament, Rauhi Fattouh, was sworn in as temporary president.

"I swear by God to protect the nation, the homeland and its sacred places and respect the law and take care of the interests of the people," said Fattouh, assuming one of Arafat's top jobs until elections are held within 60 days.

The Palestinian leadership, which has declared a 40-day mourning period for Arafat, also made two other moves Thursday.

Former Palestinian Prime Minister Mahmoud Abbas was elected as head of the Palestine Liberation Organization, one of Arafat's other leadership posts.

And a challenge was made to Israel. Palestinian foreign minister Nabil Shaath called on Israel to resume implementation of the U.S.-backed "road map" peace plan, saying it was time Israel met its obligations.

Shaath accuses Israel of having used its dislike for Arafat as an excuse for avoiding its obligations under the plan, including withdrawing from West Bank towns.

"Now, the road is open, and we are telling the Israelis, welcome if you want to implement the road map, then implement it," Shaath said. "It was the path of President Araat, and we will go on the path of Arafat."

Israeli Prime Minister Ariel Sharon, for his part, issued a statement Thursday that did not mention Arafat's name but did say "recent events" could bring about a "historic turning point in the Middle East."

"The death of Yasser Arafat is a significant moment in Palestinian history," said President Bush in a statement issued by the White House.

Arafat died in intensive care at 3:30 a.m., according to a French military hospital spokesman who said that because of French privacy laws, no details will be given on the cause of death or anything else.

Arafat's wife Suha was at his bedside when he died, reports CBS News Correspondent Elaine Cobbe. Mrs. Arafat told friends she was called in when his condition worsened again during the night. In the early hours of the morning, his blood pressure suddenly dropped and he slipped away quietly. She said he looked peaceful in death.

On the Gaza Strip - where Arafat was idolized as a hero whose picture hangs everywhere, in homes and businesses and on buildings and banners - tens of thousands of Palestinians poured into the streets Thursday in a spontaneous show of grief over their leader's death.

Dozens of gunmen fired into the air, and marchers waved Palestinian flags. Loudspeakers blared some of Arafat's most famous quotes. The crowds closed roads of refugee camps and towns across the Gaza Strip.

Israel, fearing the possible outbreak of riots, sealed the West Bank and Gaza Strip and sent troop reinforcements to both areas.

Israeli troops also beefed up security at Jewish settlements, for fear they could be attacked by Palestinians.

The Al Aqsa Martyr Brigades in Gaza decided Thursday to change their name to honor the late Yasser Arafat, the group's spokesman said. The violent group linked to Arafat's Fatah movement said it would now be called the Martyr Yasser Arafat Brigades.

Egypt is hosting what it calls a "military funeral" in Cairo Friday, with a long list of Arab heads of state in attendance, along with representatives of many other nations. The country was chosen because travel to Israel and the West Bank poses a diplomatic dilemma for many of the Arab dignitaries.

The burial will also be Friday, at Arafat's headquarters in Ramallah on the West Bank. The battered compound was the scene of Arafat's last stand where he weathered an Israeli siege and remained trapped and isolated for two and a half years, until two weeks ago when he was rushed to France for medical treatment.

Arafat wanted to be buried in Jerusalem - forbidden by Israel now - something his successors hope to accomplish in the future.

The Israeli military says it will restrict access to the burial service, and will only allow Palestinians with the necessary permits to attend. The military will also allow symbolic funeral processions to be held in towns and refugee camps across the West Bank and Gaza.

Arafat's last days were as murky and dramatic as his life. Flown to France on Oct. 29 after nearly three years of being penned in his West Bank headquarters by Israeli tanks, he initially improved but then sharply deteriorated as rumors swirled about his illness and his wife Suha accused aides of trying to usurp his authority.

A resilient survivor of war with Israel, assassination attempts and even a plane crash, Arafat was born Rahman Abdel-Raouf Arafat Al-Qudwa on Aug. 4, 1929.