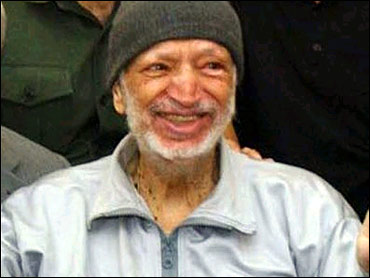 Idolized by millions of Palestinians and vilified by a nation he endeavored to destroy for decades, Yasser Arafat lived at times as a terrorist, at times as a statesman. And at times he tried to do both.

His unshaven face, olive-drab uniform and black-and-white checkered keffiyah head-scarf were once the most recognizable symbols of a violent Palestinian struggle to establish an independent state.

He survived plane crashes and attempts on his life. He lost close friends and comrades-in-arms to assassins' bullets and Israeli bombs. He called for death to Israel and won the Nobel Peace Prize.

"He has been an historic figure for the Palestinians," Shibley Telhami, a senior fellow of the Brookings Institution, told CBS News. "He was the person who succeeded in making Palestinian nationalism a focal point of world politics. He succeeded in galvanizing the Palestinians as a separate entity, not dependent so much on Arab states, brought them to the verge of a Palestinian state."

Yet his international stature, once the shining star of the Palestinian fight for statehood, dulled considerably when he snubbed a White House proposal in 2000 that offered another large step toward Palestinian independence.

At one time it appeared his Palestinian flock would follow him either in terror or in peace. But the man who in high school was given the nickname Yasser, meaning "easy-going," seemed unwilling or unable to end a bloody Intifadah that has led to the death of thousands of Palestinians and Israelis. As the Palestinian attacks on Israeli citizens and troops have grown more ferocious, so has the Israeli response.

During an interview with CBS News' 60 Minutes, the embattled Palestinian president asked for international intervention to help stop the surge of renewed bloodshed.

"I am begging you to help me to stop this tragedy," Arafat told 60 Minutes in October 2000, just when the Intifadah was on the verge of erupting into uncontrollable tit-for-tat exchanges of Palestinian suicidal bombings and retaliatory Israeli military strikes.

The political landscape has been altered drastically since that appeal. The 2000 election of President Bush produced a hands-off U.S. approach to the Middle East peace process. The Sept. 11 terrorist attacks further diverted U.S. attention from the region until very recently.

The battle between the Israelis and the Palestinians, meanwhile, raged on, and the physical and mental strain on Arafat began to show.

Arafat was born Mohammed Abdel Raouf Arafat al-Qudwa al-Husseini in Cairo, Egypt, on Aug. 24, 1929. As a young boy, he lived with relatives in Palestine, a region then under British rule.

While Arafat was growing up in the 1930s and 1940s, Palestine's Jews and Arabs fought the British and each other for control of the region. Both viewed the barren strip of land on the eastern end of the Mediterranean Sea as their homeland.

During his college days in Cairo, Arafat joined the Union of Palestinian Students in 1944 and later worked as a gunrunner, helping to smuggle arms from Egypt into Palestine. Fighting between Palestine's Jews and Arabs was escalating after surrounding Arab states rejected a United Nations resolution supporting the partition of Palestine into Jewish and Arab sectors.

As a respected student leader, he went on to study guerrilla tactics, recruited and trained Palestinian students and served as guerrilla leader in the early 1950s. He was jailed in Egypt in 1954 following the discovery of a plot to assassinate President Gamal Abdel Nasser.

In 1956 Arafat founded al-Fatah, an underground terrorist group dedicated to the destruction of the new state of Israel. Following the 1967 Six-Day War between Israel and its Arab neighbors, Arafat entered the tumult of Middle East politics, becoming the chairman of the PLO, a guerrilla group absorbed by al-Fatah.

The PLO was implicated in several sensational hijackings during the 1960s and '70s and was responsible for the murder of 11 Israeli athletes at the 1972 Munich Olympics.

From its base in Jordan, Arafat's PLO increased guerrilla activities until he was evicted from Jordan in 1971. He fled to war-torn Lebanon.

During the PLO's tumultuous years, Arafat also began pursuing diplomatic means to achieve independence for Palestine. Addressing the United Nations General Assembly in 1974, Arafat spoke while brandishing a "freedom fighter's" gun in one hand and an olive branch in the other.

Back home in the Middle East, more trouble was brewing. Arafat was forced once again to find a new base of operations almost a decade after his U.N. speech when Israel invaded Lebanon, hoping to decimate the PLO and possibly kill its leader.

In 1982, Arafat and his followers were forced to leave Beirut, which was encircled by Israeli forces. He moved his headquarters to Tunis in northern Africa. From Tunis, he would try to shift his image to respected statesman and the PLO would make a decision to focus on the political issues and not just terrorist activities. The dramatic change altered the organization's image from barbaric to a movement with legitimate claims.

Five years later, the first Palestinian Intifadah erupted in the Israeli-occupied territories. Despite Arafat's formal renunciation of terrorism, Israel still refused to deal with the PLO.

"We are fed up with this bloodshed. We are looking to have peace for our children and also for their children," Arafat told 60 Minutes in his first interview in 1989, during the first Intifadah. "Otherwise we have to blame ourselves and they have to blame themselves and the next generations will not respect us. This is an historical chance. If we lose it, we are criminals."

In 1988, in a move that stunned the world, Arafat recognized the right of the state of Israel to exist and denounced the PLO's former terrorist activities. Visions of a Palestinian state continued during the early '90s, when secret peace talks in Oslo, Norway, resulted in an historic agreement. A PLO-Israel peace plan was sealed with handshakes on the White House lawn on Sept. 13, 1993.

In return for recognizing Israel's right to exist, Palestinians were given limited self-rule of the West Bank and the Gaza Strip. With President Clinton escorting the two leaders to the table, Arafat signed the Declaration of Principals with Israeli Prime Minister Yitzhak Rabin. The agreement earned Arafat the following year a shared Nobel Peace Prize with Rabin and former Israeli Prime Minister Shimon Peres.

Arafat returned to Gaza triumphant — one step closer to his dream of an independent Palestinian state. The terrorist-turned-peacemaker was elected president of the Palestinian Authority almost 40 years after founding al-Fatah, the underground terrorist group dedicated to the destruction of the then young Jewish state of Israel. He continued to serve as the chairman for the Executive Committee of the PLO, which to this day still acts as an umbrella organization representing the world's non-Jewish Palestine population.

His attempts to complete the peace process with Israel hit many potholes since his presidential election. Hurdles to creating an independent nation became more difficult to clear.

Turning the territories around economically was been a struggle. The infrastructure was in ruins and Palestinian residents have not shaken their economic dependence on Israel. Some of Arafat's Palestinian Authority colleagues challenged his autocratic manner. Many criticized his dealings with Israel as too lenient, while others say he was too aggressive.

His rejection of a plan presented by President Clinton in July 2000 at Camp David may have doomed him from using the statehood card to create a crisis in hopes of a diplomatic rescue from the United States.

When the agreement failed, Mr. Clinton placed most of the blame on Arafat for not accepting Israel's concessions. Arafat, in his defense, said the plan offered too few Israeli concessions in favor of the Palestinians. Frustrated with no clear future, Palestinians once again picked up rocks and guns. Israel, predictably, retaliated with military might.

In response to the Palestinian terrorism, Israel reoccupied Palestinian territory and gave up on Arafat as a peace partner, and effectively locked him up in his demolished West Bank headquarters.

Palestinian leaders blamed that confinement in Ramallah for his deteriorating health.

Ever the political survivor, Arafat jealously held onto power, despite calls from President Bush for his removal, and threats from Israel that it would force him into exile again or kill him.

In 2003, Arafat signed legislation creating the position of prime minister, then offered the job to long-time deputy Mahmoud Abbas. But he then hampered Abbas' efforts to form a government and then opposed many of Abbas' plans. Abbas resigned in September, after just four months as prime minister.

His successor, Ahmed Qureia, fared little better, threatening to quit after just a month in office, and again in July 2004.

The rancor continued even after Arafat lay in the French hospital in a coma. Several top Palestinian leaders, including both Prime Minister Qureia and Abbas, planned to visit Arafat there. His wife accused them of conspiring to usurp her husband's four-decade long role as Palestinian leader.

"Let it be known to the honest Palestinian people that a bunch of those who want to take over are coming to Paris," she screamed in Arabic over the telephone.

"You have to realize the size of the conspiracy. I tell you they are trying to bury Abu Ammar alive," she said, using his nom de guerre.

Under French law, as Arafat's next of kin, she was able to deny the delegation access to Arafat in the hospital.

"The vast majority of [Palestinians] see him as having served their cause for many decades; that's why he still is a figure, that's why they stick with him," said Tellhami in October 2004, "but I think a growing number of Palestinians has come to believe that he is maybe no longer the right man for this right stage of Palestinian politics."

Still, because he had been such an overwhelming figure in his influence in the Mideast, both the Palestinians and the Israelis worried about the possibility of riots and other escalations of violence as his health deteriorated.