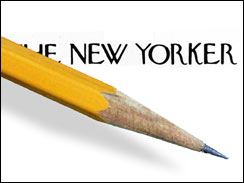 Perhaps the only thing more obsessive than a New York Yankee fan is a New Yorker magazine fact checker.

It takes approximately the same time (one second) for a Bronx Bomber fan to recall the team's starting right fielder in 1976 (Oscar Gamble) as it does for a New Yorker copy editor to verify the State Department's coordinator for counterterrorism in 1998 (Michael Sheehan... and be sure to put an umlaut on "coordinator.")

The two neurotic worlds collided recently over the most controversial entity in journalism and sports: a cartoon.

But don't tell that to sharp-eyed subscriber Michael Mahler. In a letter to the magazine, the L.A. resident cries foul on the cartoon's discrepancies, beginning with the fictional player's facial hair:

"First, the player has a beard, which the Yankees organization does not permit. Second, he is wearing a road uniform, with "New York" across the front, instead of home pinstripes with the interlocking "NY" logo, which he would have to be wearing if he were batting in the bottom of the ninth, as he indicates in his message."

We do not know for sure if Mahler is a Yankee devotee or simply a baseball fan with too much time on his hands. Regardless, the prestigious New Yorker fact checkers have been humiliated at their own game.

Massachusetts crackdown has also ensnared Chipotle and Qdoba chains, with the state uncovering thousands of violations.