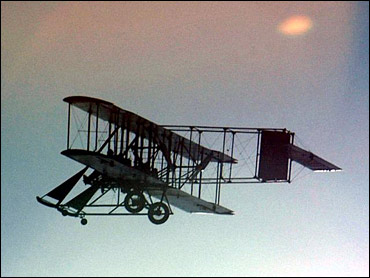 One-hundred years after the Wright brothers' first flight, an attempt to re-create the moment failed Wednesday when a replica craft couldn't get off the ground and sputtered into the mud. Organizers hoped to make a second try.

A cheer rose from the crowd of 35,000 when the muslin-winged flyer roared to life and began moving down a wooden launch track. But that cheer suddenly turned to a groan when the rickety craft stopped dead in a muddy puddle at the end of the track.

Pilot Kevin Kochersberger dropped his head in apparent chagrin and later laughed as the single-engine plane was hoisted back on the track.

Organizers tentatively scheduled a second try later in the afternoon. The plane did not appear to be damaged, but it was being inspected back inside a tent pavilion.

The re-enactment was originally scheduled for 10:35 a.m., exactly 100 years to the minute after the brothers from Dayton, Ohio, made their first tentative hops through the air with a delicate contraption fashioned in their bicycle shop. The first try was delayed by heavy rain and didn't come until early afternoon.

Though disappointing, the failed first try at a re-enactment was not historically inaccurate. The Wrights also crashed their Wright Flyer, three days before finally getting it off the ground.

Earlier Wednesday, President Bush told the drenched crowd at the Wright Brothers National Memorial that the brothers would not have been deterred by a little bad weather.

"On the day they did fly, just like today, the conditions were not ideal," Bush said.

"The Wright brothers hit some disappointments along the way. There must have been times when they had to fight their own doubts," he said. "They pressed on, believing in the great work they had begun and in their own capacity to see it though. We would not know their names today if these men had been pessimists."

Kochersberger, an engineering professor from Rochester, N.Y., was piloting a meticulous reproduction of the 1903 Wright Flyer that was built by the Wright Experience, a nonprofit group based in Warrenton, Va.

There had been speculation that Bush would use the centennial of flight to announce a new mission to the moon, but the White House made clear the president had no such intentions.

Actor John Travolta, introducing Bush, told the president, "not only do I vote for that option, but I volunteer to go on the first mission."

Bush made no commitments on a new space mission, but said of Travolta: "We shall call him moon man from now on."

Astronaut Buzz Aldrin, the second man to walk on the moon, delivered the invocation and singer Lee Greenwood performed "The Star-Spangled Banner."

As Greenwood finished the national anthem, a bald eagle was released in the middle of the field to the cheers of the crowd.

Bush did not stay to see the re-enactment. As his departing Air Force One passed over the park, it dipped its right wing, as if in salute.

On Dec. 17, 1903, Orville was at the controls for that first hop that lasted all of 12 seconds. He and Wilbur alternated for four flights that day; the last, by Wilbur, lasted 59 seconds and ran for 852 feet.

In the century since, travel by airplane has gone from a barnstormer's novelty act to such a routine that it brings more complaints than ruminations on the extraordinary fact that it simply can be done.

Some still remember the early wonder. John Glenn first went into the air as an 8-year-old boy in the late 1920s. Strapped into the back of a two-seat plane with his father beside him, Glenn buzzed the fields and woods near his native Cambridge, Ohio.

"We sat in the back with one seat belt strapped across the both of us," he recalled this week. "Looking down, I was hooked from then on."

As a grown man in 1962, he was the first American to orbit Earth aboard a Mercury-Atlas 6 spacecraft. Now, at 82, he still flies his personal plane, a twin-engine Beechcraft.

"I guess I never got tired of it. Just being able to see things as they are from that altitude, for me it's just always been an enjoyable experience," Glenn said.

In a sad reminder of the technology's perils, a small plane on its way to the flight celebration crashed Wednesday after taking off from a small airport south of Raleigh. The pilot was killed and three passengers were injured. A fifth person walked away.

The plane had flown about three-quarters of a mile when it banked and crashed, said Capt. James Estes of the Lee County Sheriff's Department. The cause of the crash was unknown.

Every day, commercial airlines around the world carry about 3 million people, for many of whom the most remarkable part is the in-flight movie.

Not Len Razzi, a retirement plan salesman from Glen Moore, Pa., who had his first airplane ride when he was 26 and now, at 43, has earned the rating of commercial pilot.

His own training let Razzi know that flying is no simple feat.

"There's a wide-eyed wonder every time I get on an airplane," he said. "I always ask for the window seat."
By Scott Lindlaw