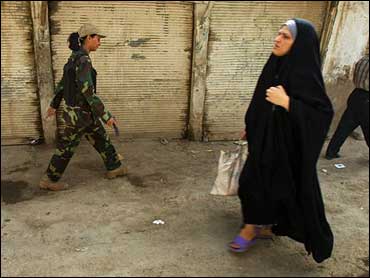 A chapter of Iraq's draft constitution obtained by The Associated Press gives Islam a major role in Iraqi civil law, raising concerns that women could lose rights in marriage, divorce and inheritance.

The proposal also appears to rule out non-governmental militias, an area addressed Monday by the new U.S. ambassador, Zalmay Khalilzad. Urging Iraqis to build national institutions, he said there is no place for factional forces that "build the infrastructure for a future civil war."

The civil law section, one of six to make up Iraq's new charter, covers the rights and duties of citizens and public and private freedoms. The language in the chapter is not final, but members of the charter drafting committee said there was agreement on most of its wording.

Committee members have been rushing to complete the constitution so the Iraqi National Assembly can set the final wording by Aug. 15. Parliament's version would be put to a public vote by mid-October, and if approved, elections would follow by the year's end.

The drafting panel's efforts got a boost Monday when its 12 Sunni Arab members ended a boycott, easing fears the document might be rejected by the ethnic community at the heart of the insurgency.

Sunni Arab support is crucial because the charter can be scuttled if voters in three of Iraq's 18 provinces reject it by a two-thirds majority — and Sunni Arabs are a majority in four provinces. Sunni Arabs make up about 20 percent of Iraq's 27 million people but dominate areas where the insurgency is raging.

A Sunni member of the constitutional commission, Saleh al-Mutlaq, told AP that he and his 11 colleagues agreed to resume work after receiving assurances from the government that their grievances would be addressed.

Those concerns included better security after last week's assassination of two colleagues, which triggered the boycott, and for an expanded role for the Sunni Arab minority in the constitutional deliberations.

On Tuesday, Iraq's most feared terrorist group warned Sunni Arabs against taking part in the October referendum on the constitution, saying their participation would make them infidels — and therefore subject to the same treatment as occupation forces.

In a statement posted on the Internet, al Qaeda in Iraq slammed recent calls by some Sunni leaders encouraging the religious minority, who form the core of the current insurgency, to get involved in the political process.

Most worrying for women's groups has been the section on civil rights in the draft constitution, which some feel would significantly roll back women's rights under a 1959 civil law enacted by a secular regime.

In the copy obtained by AP on Monday, Article 19 of the second chapter says "the followers of any religion or sect are free to choose their civil status according to their religious or sectarian beliefs."

Shiite Muslim leaders have pushed for a stronger role for Islam in civil law but women's groups argue that could base legal interpretations on stricter religious lines that are less favorable toward women.

Committee members said Monday they had taken account of women's concerns, but said they were not planning to make changes since the National Assembly will have final say on the wording.

Committee member Khudayer al-Khuzai said Muslims would be free to choose which Islamic sect they want to be judged by under the proposed civil law.

"We will not force anyone to adopt any sect at all. People are free to choose the sect they see as better or more legitimate. This is implemented in marriage, inheritance and all civil rights," he said.

Not all Shiite laws are disadvantageous for women. Many Sunni Muslims who have only daughters prefer to follow Shiite religious law when it comes to inheritance since daughters inherit everything their parents leave. Under Sunni rules, daughters have to share their inheritance with uncles, aunts and grandparents.

While not specifically addressing militias, the draft chapter would permit Iraqis to form only political parties and would ban individuals from possessing weapons.

"There is no place for militias," said al-Khuzai, a Shiite. "We have even made it clear for non-governmental organizations that they should not have any secret or military activities."

In other areas, the chapter obtained by AP would make the judiciary independent, require public trials, ban torture and require a judicial order to detain anyone. Child labor, which flourished in the 1990s after the United Nations imposed sanctions on Iraq, would be banned.

Also, the draft would prevent tens of thousands of Iraqi Jews who emigrated to Israel in the 1950s from getting back their Iraqi citizenship. It says only Iraqis who lost their citizenship after Saddam's Baath Party came to power in 1963 "will be allowed to get it back."