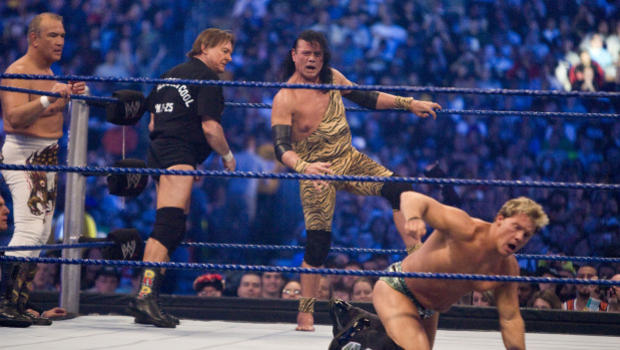 World Wrestling Entertainment Inc. was sued Monday by Jimmy "Superfly" Snuka and dozens of other retired wrestlers who claim that the organization is responsible for and had prior knowledge of the effects of repeated neurological injuries sustained in the ring.

The case involves 53 "retired professional wrestlers and performers who sustained long term neurological injuries during their tenure with WWE," including Joseph "The Road Warrior Animal" Laurinaitis and Chris Pallies, known as "King Kong Bundy." Snuka was represented by a guardian after a judge last month declared him mentally unfit to stand trial for the 1983 beating death of his girlfriend. He claimed to be suffering from dementia due to repeated head trauma.

The suit against WWE and its chairman, Vince McMahon, follows those accusing other sports organizations, including the National Football League and the National Hockey League, of not doing enough to protect athletes from head injuries. The NFL agreed to a $1 billion settlement last year.

The lawsuit states that the Stamford, Connecticut-based WWE "routinely failed to care for the Named Plaintiffs' repetitive head injuries during their career in any medically competent or meaningful manner that complied with any known published contact sports return to play guidelines at the time the injuries occurred."

The lawsuit also claims that the injuries sustained by wrestlers "involve a neurological disease and ongoing disease process called Chronic Traumatic Encephalopathy (CTE) as well as the effects of Traumatic Brain Injuries (TBI) that occur as a consequence of repetitive head trauma sustained by the Plaintiffs as professional wrestlers in matches sponsored, controlled and created by WWE."

Unlike other sports, the wrestlers in the suit state that wrestling matches "involve very specific moves that are scripted, controlled, directed and choreographed by WWE. As such the moves that resulted in Named Plaintiffs' head injuries were the direct result of the WWE's actions."

The suit also claims WWE "deliberately ignored and actively concealed ... medically important and possibly lifesaving information about specific neurological conditions like CTE that afflict wrestlers and contact sports athletes with similar clinical histories of head trauma." It claims the WWE knows that such conditions can "result in suicide, drug abuse and violent behavior that pose a danger to not only the athletes themselves but also their families and community," but that company officials did nothing to warn or educate the wrestlers about the risk or to provide them with treatment.

Because wrestlers were only hired as independent contractors, not staff employees, the plaintiffs claim that they had no recourse against the WWE's policies.

The lawsuit was filed in U.S. District Court in Connecticut by Konstantine Kyros, the same lawyer who has represented other retired wrestlers in concussion-related lawsuits that have since been dismissed.

In a statement, WWE responded: "This is another ridiculous attempt by the same attorney who has previously filed class action lawsuits against WWE, both of which have been dismissed. A federal judge has already found that this lawyer made patently false allegations about WWE, and this is more of the same. We're confident this lawsuit will suffer the same fate as his prior attempts and be dismissed."