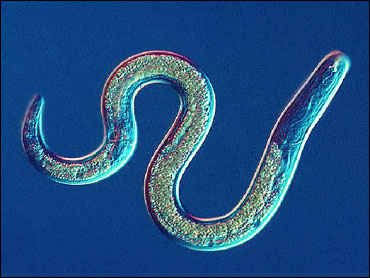 Male sex really is important to the survival of the species — at least for the nematode, a lowly worm that can reproduce without masculine help but adapts better if males get into the act.

In a study appearing Friday in the journal Science, researchers say they have found that nematodes resulting from the union of a male and female worm are able to switch gender in response to changes in the environment. But worms born through a parent's self-fertilization are unable to make this gender change.

This, said Elizabeth B. Goodwin, a University of Wisconsin researcher, may be the reason nature keeps males as a part of the nematode population, even when they aren't needed for reproduction.

"The X chromosome coming from the dad makes all of the difference" in the species survival, said Goodwin, an associate professor of genetics and the senior author of the study.

"Sometimes we wonder why men are around, and maybe this explains it," she said, before adding with a laugh: "Not entirely, but it helps."

The nematode is a favorite species used by researchers to answer such basic questions about sex and reproduction. The small creature, known as Caenorhabditis elegans, lives in the soil and feeds off bacteria. It is tiny, less than the thickness of a human hair, but it offers huge benefits to science. Its skin is clear and researchers can watch biological processes taking place inside the animal. And the animal matures quickly, going from embryo to adult in just four days.

C. elegans has another characteristic that intrigues scientists: Nearly 99.9 percent of the population is hermaphrodite — females with two X chromosomes but which can produce sperm and self-fertilize to make babies. However, 0.1 percent of the population is male, with one X chromosome. Since the worm can self-replicate, researchers wonder, why would the species continue to make males if they are not needed?

"It is more advantageous to a species to reproduce by self-fertilization than by having males and using cross-fertilization," said Goodwin. Sexual reproduction, she said, is costly in time and energy.

In the new study, Goodwin and her co-authors from the University of Alberta in Canada limited the food fed to the nematodes to monitor the effect of mild starvation on reproduction. They found that when confronted with famine, about half of the hermaphrodite nematode larvae that had been produced by a sexual reproduction turned into males, switching gender by shedding one of their X chromosomes. This caused the worms to develop into males that look different, live longer and are able to pass along their genes through sperm.

Hermaphrodite nematodes produced by self-fertilization, however, were unable to make the gender switch.

"This suggests the reason these worms have males is that it allows the progeny from cross-fertilization to respond to a changing environment better than just having hermaphrodites," Goodwin said.

Having more males around lowers the number of progeny, an appropriate response when food is in short supply. Also, Goodwin said male nematodes live longer and are better at surviving in tough conditions because they can move farther to forage for food.

"The hermaphrodite is not very mobile," she said. "It is sort of the couch potato of the worm world."

Fundamentally, said Goodwin, the study proves that "sex is good" for the species.