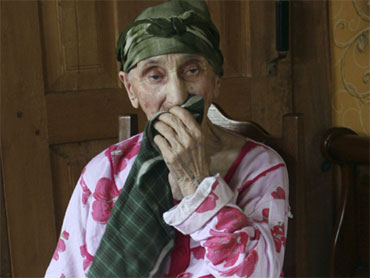 Georgian officials claim Antisa Khvichava was born on July 8, 1880 in a remote mountain village. She's so old that she stopped working as a tea and corn picker when she was 85. That was 45 years ago!

"I've always been healthy, and I've worked all my life - at home and at the farm," said Khvichava, in a bright dress and headscarf, her withering lips rejuvenated by shiny red lipstick. Sitting in the chair and holding her cane, Khvichava spoke quietly through an interpreter since she never went to school to learn Georgian and speaks only the local language, Mingrelian.

Unfortunately, her birth certificate was lost sometime during the last 100 years or so, but the woman claims to have other documents which prove her claim.

The Gerontology Research Group currently recognizes 114-year-old Eugenie Blanchard of Saint Barthelemy, France, as the world's oldest person. The organization is yet to examine Khvichava's claim.