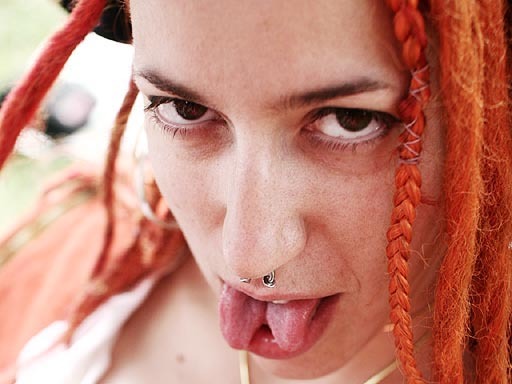 For some it represents beauty, spiritual exploration - a modern primitive rite of passage. Others view it as disfigurement plain and simple, and some doctors suspect that it's a possible symptom of a mental disorder.

The San Francisco bay area has long been on the cutting edge, so to speak, of piercing, skin-stretching, flesh suspension, and other forms of body mod. Members of the community are sensitive to the criticism of outsiders.

Traci Joy Burleigh, 38, a yoga instructor and active member of this community, who has been suspended by hooks and had "corset piercings" among other things, says that she has no history of mental illness. For her, body modification is "empowering" and has helped her to "more fully integrate as a modern human, take responsibility for my body and cultivate will and fearlessness."

Heron Saline, 52, a San Francisco hypnotherapist, says that body modification is generally done with a "spiritual intention" with an emphasis on safety. "It's about love and choosing health," he says.

But extreme body modifications are not without risk. Doctors say self-modifiers can do serious damage to their bodies. Dr. David Bank, director of the Center for Dermatology, Cosmetic, and Laser Surgery in New York, says that anytime the skin is opened up there is the potential for infection. And when it comes to surgery done by non-medical professionals, such as the insertion of dermal implants, the risks are very serious.