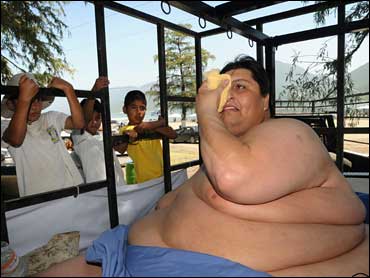 The world's heaviest man still can't walk, but he will soon be able to roll.

Manuel Uribe said Thursday he is having a 1989 Chevrolet Astrovan outfitted to support his record-breaking weight, giving him mobility after more than six years of being confined to his bed.

Uribe earned the Guinness World Record as the world's heaviest man in 2006, when he tipped the scales at 1,230 pounds. He claims to have since shed more than 500 pounds after making a public call for help.

Uribe, known as Meme to his friends, even has a name for his new ride.

"My friends call it the Meme-Mobile, just like the Batmobile," he said.

The minivan is being converted into an open-air, flatbed pickup of sorts. Manuel says he will put a bed on the back of the van to drive around town, with his new wife at the wheel. When at home, he will hang out in a remodeled garage that will include a forklift to help raise his regular bed up to the level of his car bed, allowing him to switch locations from time to time.

Uribe said that, with the new car, he plans to start up an auto parts business. And Uribe's wife, Claudia Solis, said the two are even thinking about making a trip to the beach in May.

Uribe married Solis in October, and the wedding was one of the few times he has left his home in recent years.