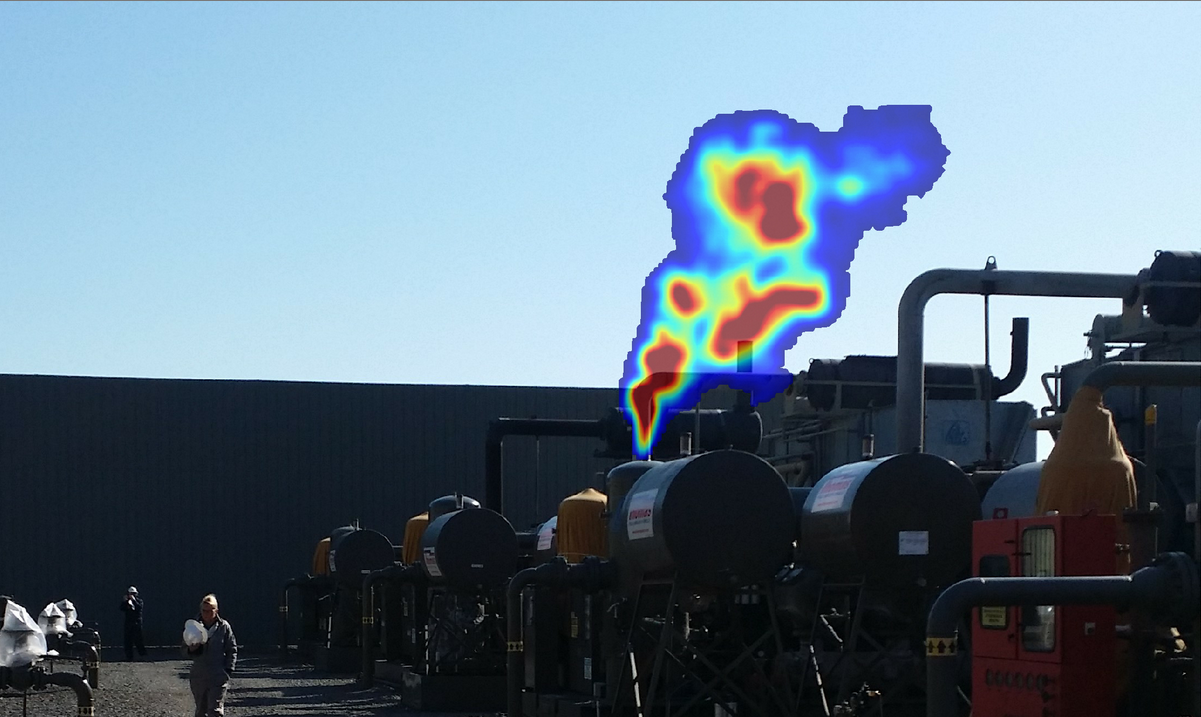 Methane leaks are bad for the environment. They're also bad for business -- unless your job is to find them.

"Reducing methane emissions is extremely important," optical engineer Robert Kester told CBS News. "Methane is a very potent greenhouse gas. But on the other hand, methane is also a valuable resource that can be used for energy as well as feedstock for chemicals, plastics, etc., so it's not good business to waste it."

Kester is cofounder and chief technology officer of Rebellion Photonics, which leverages a technology he developed to detect gas leaks in the air using a special hyperspectral video camera. The camera can immediately spot leaks in oilfields and refineries, and even determine the type of gas that's being emitted. That includes methane, a powerful greenhouse gas with 25 times the climate-warming potential as carbon dioxide.

"I never expected an oil and gas service company to be so rewarding," said Rebellion CEO and cofounder Allison Lami Sawyer. "If we can come in and help our customers lower their methane emissions even by 10 percent, that would have a really big impact in the world and our future."

While studying cancer in pursuit of a Ph.D. in bioengineering at Rice University, Kester invented a hyperspectral camera that attached to a microscope and could take pictures of cells at 30 frames per second. The device could "see" chemicals, allowing researchers to shoot live video of cancer cells to determine whether they were malignant or benign.

"Once I developed a new way to do hyperspectral imaging, I knew I wanted to start my own company based on this invention," Kester said. "But I needed help."

He reached out to a local startup incubator called Houston Technology Center, where he met Sawyer, who was getting her MBA at Rice. They formed Rebellion Photonics in 2010 to sell systems for biomedical applications.

But one day, Sawyer suggested another idea.

"Allison came to me and asked if it was possible to detect gases using our technology," Kester said.

Hyperspectral imaging is a way to visualize wavelengths in the electromagnetic spectrum that are outside the range of what the human eye can see. Different minerals and gasses each have their own spectral fingerprint, what Kester likened to a barcode. Hyperspectral cameras are able to read these unique bar codes and represent each one as a color. Typically these colors would appear in a static image, but Kester's camera could do the same thing in video, and in real time.

After months of research and experimentation, he figured out how to harness the technology for wide-field imaging, like across oilfields. Ultimately he came up with the Gas Cloud Imaging camera that could sense a cloud of gas in the air and show it on a live video feed.

"The first time we detected methane with our camera was so cool because no one had ever done it like this before and it validated the initial hunch I had," he said.

The standard detectors the petroleum industry uses for gas monitoring and detection only cover a small fraction of a rig or refinery, according to Kester. The gas fumes must touch the sensors before operators are alerted to their presence. His hyperspectral imaging camera represents a huge leap, seeing gas a it escapes from the source, long before it spreads far enough to reach a remote sensor.

The camera automatically notifies operators when an invisible (to the naked eye) and dangerous gas plume is present.

Based in Houston, Texas, Rebellion Photonics now manufactures its cameras and sells its services as a monthly subscription to companies in the oil and gas industry, including giants such as BP, Chevron and Southwestern Energy. It also landed an $800,000 military contract to put its cameras on Air Force drones.

One surprising -- and disturbing -- finding that seems to crop up again and again: Many gas leaks come from hatches that weren't closed properly.

"About 90 percent of the emissions we see are caused by human errors and are easily fixable," Sawyer said.

She found that at many of the oil and gas processing sites, dehydrators used to remove water from natural oil and gas -- specifically the ones built before 1990 -- were responsible for emitting tons of methane themselves.

Sawyer also has learned that a lot of oil and gas companies are running equipment and engines off the natural gas they collect, which emits a lot of methane, too. Her solution? "Instead, run it off plain old diesel, because trucking it in is a lot better."

Named Wall Street Journal's Startup of the Year in 2013, Rebellion Photonics is well positioned to benefit from an increasing focus on reducing methane emissions across the country and around the world.

In January, President Obama announced an ambitious new goal to cut methane emissions from the oil and gas sector by 40 to 45 percent below 2012 levels by 2025.

"It looks like the EPA is getting more involved and they're going to make federal laws, so now all the states are going to have to monitor methane emissions more closely," Sawyer said. "This is a good thing, but it will keep our company very, very busy."

She and Kester are now expanding to international markets, including the Middle East and Western Europe.

"We all have to breathe the same air," Kester said. "So from an environmental perspective, I think it's great to finally be able to provide the industry with an easy-to-use solution that can allow companies to operate their business better in terms of safety and efficiency."