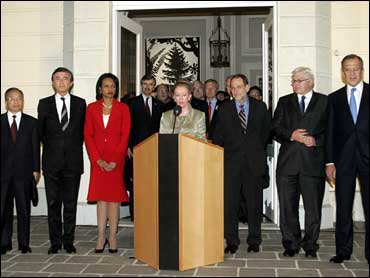 World powers have compromised on a demand that Iran commit to a long-term moratorium on uranium enrichment and are asking only for suspension during talks on Tehran's nuclear program, diplomats said Wednesday.

In another concession, Iran would be allowed to carry out uranium conversion, a precursor to enrichment, if it agrees to multination talks, the diplomats said. They spoke to The Associated Press on condition of anonymity because they are not authorized to divulge the contents of the offer made by six countries to Tehran on Tuesday in a bid to defuse the Iranian nuclear standoff.

Such changes to long-standing international demands on enrichment are important because they signal possible readiness to accept some limited form of the activity, despite fears that it can be misused to make the fissile core of nuclear warheads.

Since talks between key European nations and Iran broke off in August, the public stance by the European negotiators and the United States has been that Iran must commit to a long-term moratorium on enrichment to establish confidence as a precondition for talks on the nuclear standoff.

Diplomats have told the AP that Germany, which participated in drawing up the six-nation package of perks and punishments meant to ultimately persuade Iran to stop enriching uranium, has been advocating that Tehran be allowed such activity on a small scale.

Mohamed ElBaradei, the head of the Vienna-based International Atomic Energy Agency, has backed that view, arguing that with Iran already successful in small-scale enrichment, it was unlikely to give up its right to such activities.

Iran announced April 11 that it had enriched uranium for the first time, using 164 centrifuges. Still, the country would need tens of thousands of centrifuges to produce adequate fuel for a nuclear reactor or material for a warhead, and those advocating that Iran be allowed to do research and development on enrichment say it is better to permit an internationally supervised program on a small scale and try to gain agreement from Tehran that it will not develop a large industrial program.

In an April report, ElBaradei said Iran's claim to have enriched small amounts to a level of 3.6 percent, fuel-grade uranium, as opposed to weapons-grade enriched to levels above 90 percent, appeared to be true.

The report also said uranium conversion, an activity linked to enrichment, "is still ongoing," adding that more than 110 metric tons, more than 120 U.S. tons, have been converted during the past eight months. Were it used for weapons, that amount would be enough for more than 15 crude nuclear bombs, experts say.

A new report from ElBaradei ahead of next week's meeting of the IAEA's 35-nation board will be circulated to board members Thursday, agency officials said. One diplomat said it was unlikely to have major new revelations about Tehran's nuclear activities.

It has not been made public but some of its contents have been leaked, revealing major concessions by the U.S. meant to entice Iran to the negotiating table, among them an offer to join key European nations in providing some nuclear technology to Tehran if it stops enriching uranium, diplomats say.

A European offer of light water reactors meant for civilian nuclear energy purposes was divulged last month as part of the package, but there had been no suggestion the Americans would join in and agree to help build Iran's civilian nuclear program if Tehran freezes enrichment.

Providing additional details, a diplomat said Wednesday that under the package, Iran would be able to replenish its aging civilian fleet of aircraft not only with Boeing parts but also with new aircraft because the package dangles the prospect of lifting an embargo on such products if Iran comes to the negotiating table.

"The incentives program is designed to give Iran a face-saving way to avoid being hauled before the Security Council and to defuse the crisis," said CBS News foreign affairs analyst Pamela Falk from the U.N. "It is essentially a 'carrot-without-stick' offer, avoiding mention of what happens if Iran does not comply."

"The incentives for Iran have begun to mount up to what may be a package they may find hard to rebuff," Falk added, "including direct talks with the U.S. in a multinational setting, Boeing and Airbus aircraft parts, and limited nuclear technology."

Washington broke with decades of official policy of no high-level diplomatic contacts with Tehran, announcing last week that it was ready to join talks with the Islamic republic over its nuclear program.

One diplomats described the U.S. nuclear offer as particularly significant because it would in effect loosen a decades-long American embargo on giving Iran access to "dual use" technologies, equipment and know-how that has both civilian and military applications.

Diplomats said that in presenting the incentives to Iranian officials, top EU foreign policy official Javier Solana withheld the other part of the package, a series of measures meant to penalize Tehran if it does not relinquish enrichment.

Solana "carried a message" about potential penalties but withheld the specific threats, including the possibility of U.N. sanctions, so as not to jeopardize the "positive" atmosphere, one of the diplomats said.

Those possible penalties include U.N. Security Council sanctions such as travel bans on Iranian government officials and a freeze of their foreign assets. But in a bow to Russia and China, they contain no threat of military action, diplomats have said.

In Moscow, Russian Foreign Minister Sergei Lavrov said Wednesday that his country would support sanctions only if Iran violates the Nuclear Non-Proliferation Treaty. It was unclear whether that meant Russia was backing away from its reported commitment for firm U.N. action if Tehran rejects the package.

President Bush said Tuesday the United States will wait to see how Iran reacts to the package.

"I have said the United States will come and sit down at the table with them so long as they are willing to suspend their enrichment in a verifiable way," Mr. Bush said. "So it sounds like a positive response to me."