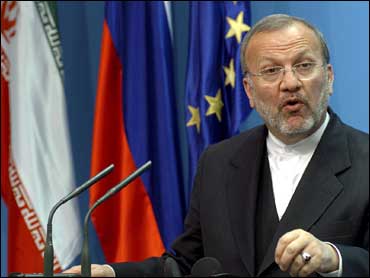 Ambassadors from six world powers reached agreement in principle Wednesday on a proposed new package of sanctions against Iran and expect to introduce a resolution to the United Nations Security Council on Thursday if their governments give a green light, the U.S. ambassador said.

Approval by the governments of the United States, China, Russia, Britain, France and Germany would be an important first step. The package would still need to be considered by the 10 non-permanent members of the Security Council who have not been part of the negotiations.

Nonetheless, an agreement by the five veto-wielding permanent members of the council and Germany would be a strong signal to the other council members of the unity of the key nations on the U.N.'s most powerful body — and a sign that they want to send a united message to Iran to suspend uranium enrichment.

"We have an agreement in principle based on some additional changes that were introduced and presented today by some delegations," acting U.S. Ambassador Alejandro Wolff said. "So it's new elements and understandings that need confirmation from capitals. But it is a package approach that, if approved by capitals, would be essentially the way forward in a resolution."

Russia's U.N. Ambassador Vitaly Churkin said "by and large it has been agreed."

"There are some among us ... who still want to double-check with the capitals on some of the details of this deal," Churkin said. "I assume as they double-check, they will get a positive response from the capitals, and they expect that this is going to be the case, too."

The council said it would consider further nonmilitary sanctions if Iran refused to suspend enrichment. Iran's response was to accelerate its enrichment program.

The modest package of new measures agreed to by ambassadors from the six countries includes an embargo on Iranian arms exports and an asset freeze on more individuals and companies associated with Tehran's nuclear and missile programs, council diplomats said.

The new resolution would also call on all U.N. member states to exercise "vigilance and restraint" on arms imports — and on the entry or transit through their territory of Iranians subject to the asset freeze, a council diplomat said.

It would also call on governments to make no new commitments "of grants, financial assistance, or concesssional loans to the government of Iran," the diplomat said, speaking on condition of anonymity because the text has not been circulated.