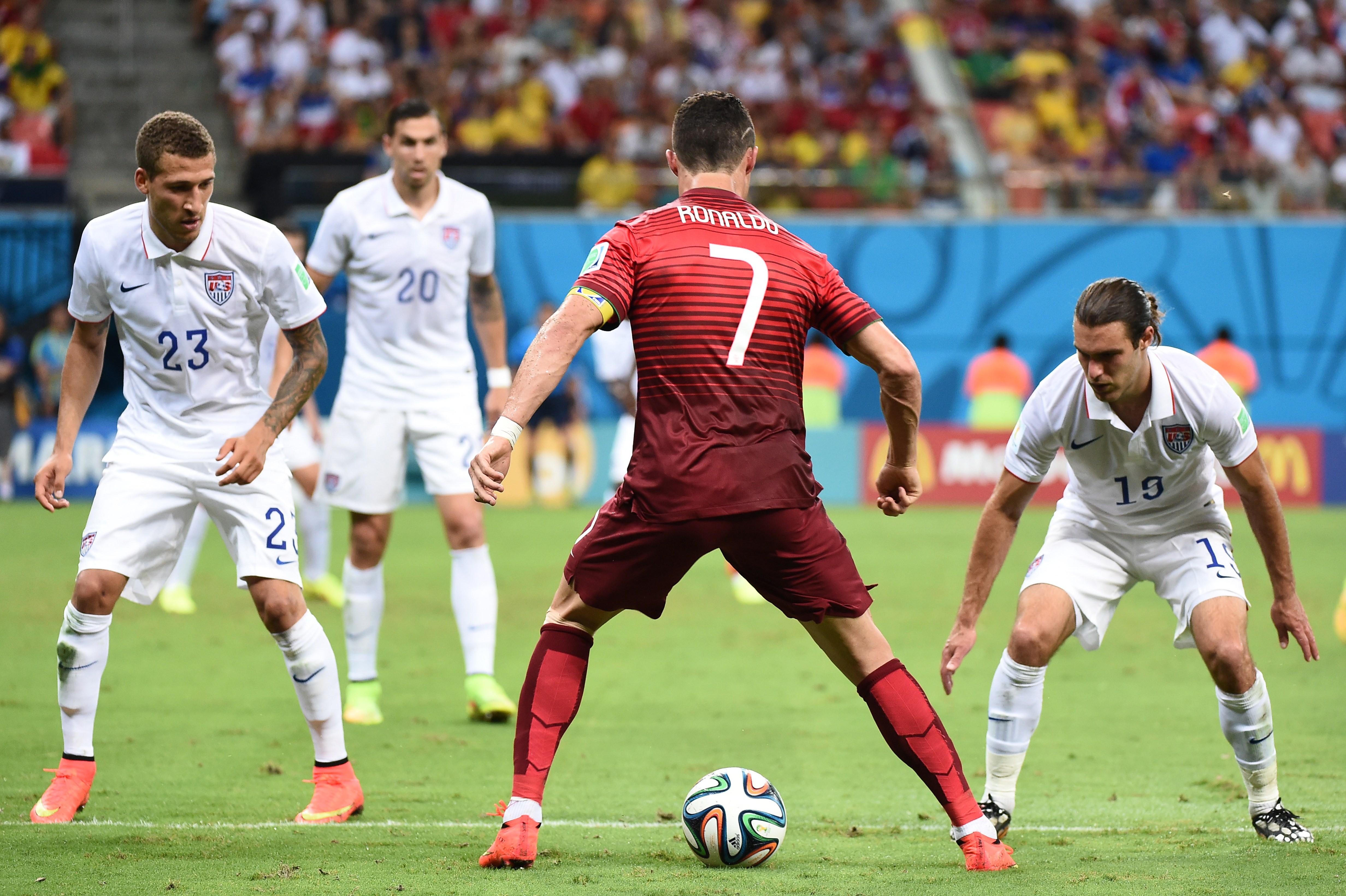 NEW YORK -- The United States' 2-2 World Cup draw with Portugal is almost certainly the most-watched soccer match ever in the U.S., an emphatic confirmation of the sport's rising popularity in a country slower to embrace it than the rest of the world.

The Nielsen company said Sunday's gripping game was seen by an average of 24.7 million viewers on ESPN and Univision. That matches it with the 24.7 million U.S. viewers who watched the 2010 World Cup final between Spain and the Netherlands.

ESPN said an additional 490,000 people streamed coverage of the game on their mobile devices through the company's app. Streaming numbers for 2010 weren't immediately available, but it's very unlikely they were that high because streaming apps were not as sophisticated then.

Many factors were in place to make it so popular: It was an exciting game, interest in the U.S. team was high because of the first-game victory against Ghana, and World Cup viewing in general has been high. The Sunday evening time slot also meant many Americans were available to watch.

"It indicates that a large group in our audience is really following the story of the World Cup, which is really terrific," said Scott Guglielmino, ESPN senior vice president of programming.

Guglielmino said he's always amused to be asked when soccerl will arrive as an attraction in the United States. He's not likely to be asked much anymore.

American players sense the support back home, as well as in stadiums in Brazil, and appreciate it. Viewing parties have pulled thousands of people into bars, public parks, movie theaters and other locations since the tournament began.

"When we get back to the hotel and we hear about Grant Park in Chicago having 10,000 fans out to watch the game and friends and family are sending pictures and videos of what's going on, it can't help but push you on because we want to make every person watching back home proud of us and proud to watch our team," said midfielder Michael Bradley.

The game has continued to grow steadily ever since the U.S. hosted the World Cup in 1994. "People know our players, people know what's going on, people get excited to watch the games and to support their team, their country," Bradley said. "I think as players we can't ask for anything more."

Alejandro Bedoya said he checks social media to see the attention the team is getting.

"It's awesome to see this and we are part of this movement I guess that is growing soccer in the States," said Bedoya, a midfielder. "It's really cool and I'm sure everybody feeds off this energy and it's really nice to see."

Through 32 matches, World Cup games averaged 4.3 million viewers on ESPN. That's up 50 percent from the nearly 2.9 million for matches in the 2010 World Cup. Sunday's match was the most-watched event ever on ESPN that did not involve American football.

Interest is also growing fast on the Spanish-language Univision, where soccer has long been the top sport. The 6.5 million people who watched the U.S.-Portugal match represented the biggest audience ever for a U.S match on the network. Overall, Univision said an average of 3.4 million watched the World Cup on the network through the first 32 matches, up from 2.3 million in 2010.

For many people with Latin-American roots used to following their home country's matches on Univision, the United States has become their second-favorite team, said Juan Carlos Ramirez, president of Univision Sports.

Both networks invested in driving up interest in the World Cup, since big ratings translates into big profits. ESPN spent time telecasting qualifying games for the tournament and has benefited from new attention paid to European soccer leagues. Univision started in a 24-hour sports network where soccer is the major topic of conversation.

The players have done their part, too. There have been plenty of well-played games with higher scoring than is often seen in conservatively-played, high-stakes matches, Rodriguez said.

"It's a combination of many good things," he said. "The planets are aligning."

Worldwide, several World Cup games have already qualified as the most-watched sporting events in their country this year. They include the 42.9 million people in Brazil who watched the home team against Croatia, the 34.1 million in Japan who saw Japan play Ivory Coast, and the 26.4 million in Germany who saw the home team beat Portugal, according to FIFA.

The social media site Facebook, through one week, has already seen more people having interactions about the tournament than it had for the Sochi Olympics, Super Bowl and Academy Awards combined.

Twitter hasn't released overall figures on World Cup activity, but said the two games that generated the most activity on its site involved Brazil. The game with Croatia resulted in 12.2 million tweets, and the match with Mexico made for 8.95 million.

The last-minute goal by Portugal Sunday may have disappointed U.S. fans, but not television executives. It means Thursday's U.S. match against Germany, instead of being relatively meaningless, is likely to decide whether the team advances. Because it will air during the daytime, it's not likely to match television ratings for the Portugal game, but ESPN is expecting big numbers for its mobile app.