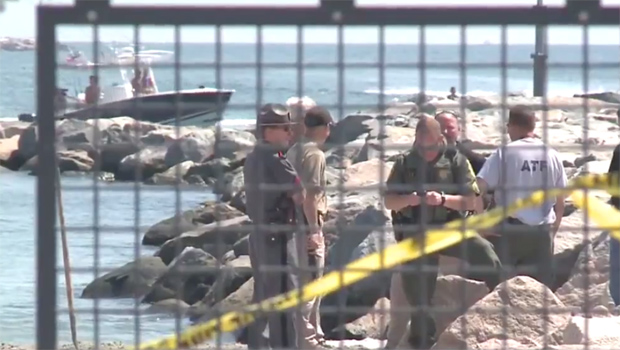 WATERBURY, Conn. - A Connecticut woman is recovering from fractured ribs suffered during an unexplained explosion on a Rhode Island beach over the weekend.

Sixty-year-old Kathleen Danise's family says she has vacationed at Salty Brine Beach in Narragansett, Rhode Island, for 30 years, and had experienced no problems there until Saturday.

The family says she was thrown 10 feet into rock breakwater during the explosion near her beach chair.

According to Danise's sister, Laura Demartino, another sister who was present at the time of the blast was also injured.

"There was a massive bang and I seen the actual rocks shift and move," Demartino told CBS Affiliate WPRI Sunday. "And I started screaming, 'Get up, get up!' The same time I'm screaming, the sand erupted, threw my sister from there, like a live canon, face-down, unconscious 10 feet away."

Danise was released from the hospital on Sunday and returned to her home in Waterbury.

A registered nurse, Danise told reporters Sunday that she was reading a book as she and her family watched a man prepare to go scuba diving. "He was putting on his scuba diving gear, and that's the last thing I remember."

The beach was reopened Sunday after officials found no evidence of an explosive device or gas line under the sand and declared the beach safe.

WPRI correspondent Madeline Wright says officials are looking into a buildup of gas or a shift in the jetty as a possible cause for the blast. Officials said there was clear evidence of a "ground disturbance" at the site.

"There was some type of noise and some type of energy transfer," Chief Kurt Blanchard, of the Rhode Island Dept. of Environmental Management, told WPRI.