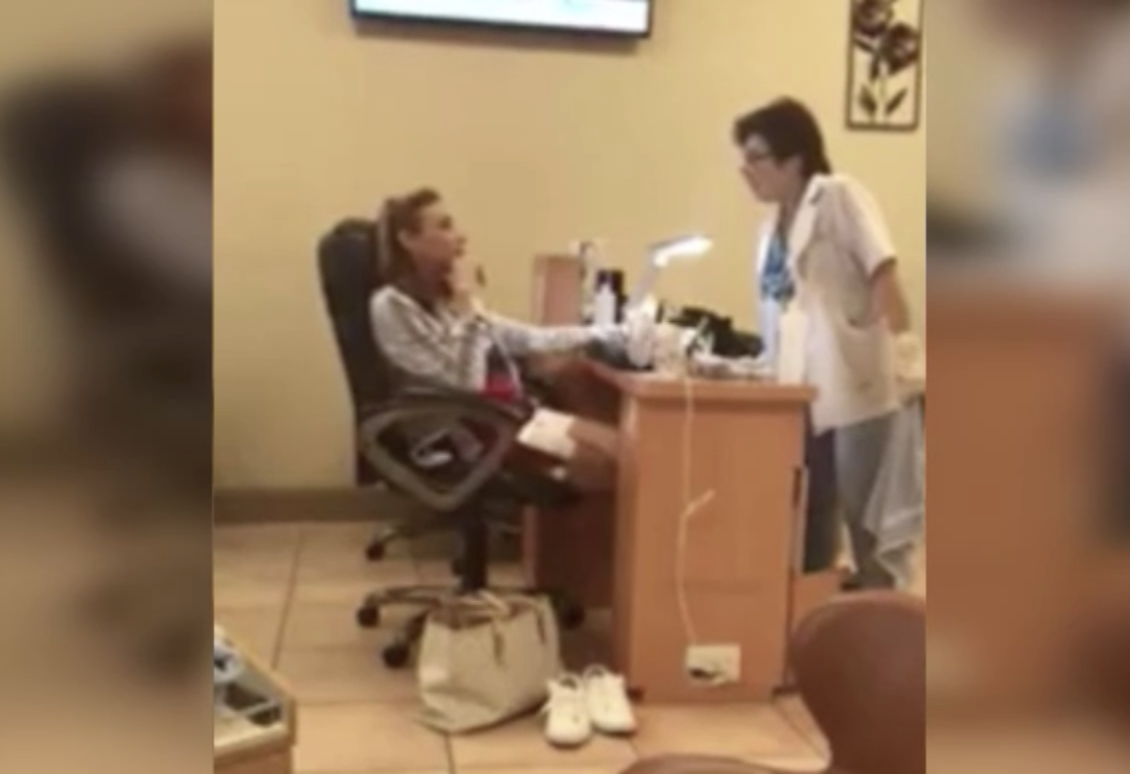 A woman's racist tirade at a nail salon in Lutz, Florida, was captured on video and has gone viral. A fellow patron of the salon, Robin L. Roether, filmed two videos of the woman as she yelled expletives and several racist remarks at the salon's owner.

"If they don't understand the language, they should go back to their own country," the woman is heard to say.

"Oh, no. No, nobody can say that," Karen Vu, owner of Bali Nail Spa, responds.

"Yes, I can," the woman says, before complaining that the man who did her nails could not explain something to her correctly.

"Who all agrees with that?" the woman turns to the other customers in the salon and asks. "Like, if you get a service done, I mean, shouldn't you be able to understand who's doing it?"

During the long exchange, Roether is filming from her pedicure chair. Other nail techs are seen continuing to work as the woman yells throughout the salon.

"I really suggest that you should learn English," the woman says in the second video Roether captured.

"Of course. Do you even know that I have to learn every single day? That's something that I work on," Vu, who immigrated to the U.S. from Vietnam, tells the woman.

Vu is heard saying "sorry" to the angry customer several times throughout the video. The woman appeared to be complaining about the service and the cost as Vu tried to apologize to her numerous times.

"Don't move to America unless you know English, OK?" the woman says. "Or you're willing to learn. It's part of moving to the United States."

"You have to pass some exams to get into the states, you know. Oh Jesus. Like really, you just spread your legs and like hop into a nail salon and watch you guys whisper behind the clients' backs," the woman says.

"We're done here," Vu tells the woman, who continued to sit at a manicure station during the entire rant. Vu repeated, "We're done now," but she did not get up or stop talking.

After the woman dropped the F-bomb, Vu seemed to have had enough. "Don't say that, you sound nasty. That's not nice. You sound nasty," Vu says.

"Your language sounds nasty. It actually sounds like you were born out of a [expletive] hermit crab," the woman replies.

Finally, another patron intervenes. In the caption to her video on Facebook, Roether says it was her friend who "had enough and told her [the ranting woman] off."

"You're being nasty," Roether's friend can be heard saying off camera.

"No, I'm not," the defiant woman replied.

"You asked my opinion a minute ago and I'm telling it to you," the other patron said. The two women then get into an expletive-laden argument.

"You don't call them hermit crabs. You're being [expletive] nasty. Get your [expletive] out," Roether's friend tells the ranter.

"You don't tell me when to get the [expletive] out," the woman replies.

Eventually, after the woman is asked to leave multiple times, she is heard yelling as she apparently walks out of the shop without paying.

"When I handled the problem, I didn't think it was big problem," Vu told CBS News. "I tried not to make it bigger. I didn't know a client filmed it... they posted it on Facebook and it affected a lot of people."

Vu says the woman "hurt a lot of people," and the salon owner is sorry for that.

"For me, I try not to let it hurt me," Vu said. "The customers are my best friend. I tried to make her better, I tried to calm her down and she kept going and going."

Vu says the woman used to frequent the nail salon every few months, but hadn't been there in a long time and never caused trouble before. Vu says the nail tech working on the woman had to walk away "because he couldn't handle it... he didn't want to hear the noise" of her yelling. "He called me to take over," Vu says.

Vu has owned the salon for 10 years and says nothing like this has never happened. "You know, discrimination, this is the first time," she told CBS News.

She also says after the video went viral, at least three people came to try and give the salon the money that the woman in the video refused to pay. "It made me emotional," Vu says.

"A lot of people called and brought flowers, donuts, shared with me. I'm very emotional," Vu says of the outpouring of support from strangers who were outraged by the video. "That hurt a lot people. In the United States, we come to immigrate. It's a problem when you hurt a lot of people like that," she said.

A similar incident in New York City was caught on camera and went viral not too long ago. A customer at the restaurant Fresh Kitchen was caught on video in a racist tirade threatening to call Immigration and Customs Enforcement (ICE) on some employees and patrons after they spoke Spanish.

That man was identified as New York lawyer Aaron Schlossberg, who later released an apology. "To the people I insulted, I apologize," Schlossberg tweeted. "Seeing myself online opened my eyes -- the manner in which I expressed myself is unacceptable and is not the person I am. I see my words and actions hurt people, and for that I am deeply sorry."

Schlossberg was kicked out of his office space and faces a complaint from two elected officials. There was also an online fundraising campaign which brought a mariachi band to accompany demonstrators outside Schlossberg's Manhattan apartment after the incident.

The woman in the video from Florida has not yet been identified.