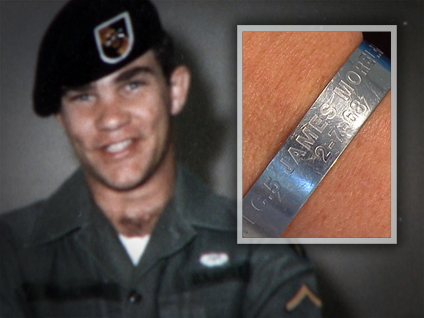 WALNUT CREEK, Calif. - While the war raged in Vietnam, POW/MIA bracelets were all the rage. The metal bracelets, sold by the millions, each bore the name of a soldier who was either still a prisoner in Vietnam, or missing in action.

CBS News correspondent Steve Hartman reports the idea was to wear the bracelet and only take it off your wrist when your Veteran came home.

They were very popular with kids. In 1972, when she was 12-years-old, Kathy Strong got a bracelet in her Christmas stocking.

"I was really excited," Strong said. "I read the paper that came with it. And I just thought. I'm going to keep it on until he comes home."

Moreland went missing in the winter of 1968 after the enemy over took his position. At the time, no one knew much more than that - so Kathy remained optimistic.

"They showed footage of the soldiers coming off the planes, and I always thought wherever he's flying into I'm going to be there and I'm going to give him my bracelet and I'm going to put it on his arm. That's how I always pictured it," Strong said. "But that wasn't meant to be."

After so many years, it became obvious to even the most hopeful, that everyone who could come home alive, had come home alive. Eventually, the bracelets went the way of the pet rock.

However, Strong wore her bracelet much longer than most. In fact, James Moreland's name has been on her wrist every day, without exception, for the past 38 years.

"I just wanted to keep the promise," Strong said.

At this point, Strong says keeping the promise means wearing the bracelet until Moreland's remains are found and returned.

"I knew there was family out there who was waiting for word, and I was just going to wait along with them," Strong said.

Anita and Linda are Moreland's sisters and closest surviving relatives. When they heard about Kathy a few years ago they asked to meet.

"To have worn his bracelet for so long," Anita said, "we just love her to death."

"She did care," her sister Linda added. "And she still does care."

Strong said she thinks about Moreland everyday. "It's usually when I have my hands out in front of me - you know, maybe driving a car or typing on the keyboard and I just think I wonder when he's coming home."

She's been wondering almost 4 decades -- but no more. In January, James Moreland's sisters got word that their brother's remains had been found and identified. In May he'll be buried, between his mother and father, in a full military funeral.

Strong said she's "going to remove the bracelet and have it buried with him."

The Origin of the POW/MIA Bracelets