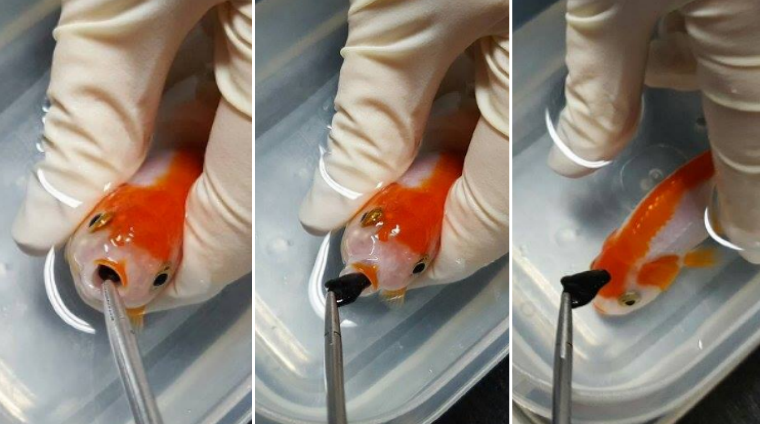 When a panicked young woman rushed her pet goldfish into a local clinic after it choked on a pebble, the veterinarians inside didn’t roll their eyes.

Instead, they got right to work to save the life of 1-year-old Conquer the fish.

With anesthetics, some gloves and a tiny instrument, the vets were able to get a hold of the small, jagged rock and remove it from the 13-gram goldfish’s mouth.

“Conquer’s eyes were obviously bigger than his belly on that day,” Madeline Rienecker a veterinary nurse at Brisbane Bird and Exotics Veterinary Services in Australia told CBS News.

“Had she not noticed the subtle changes in her pet, he surely would have starved,” Rienecker said.

Now the fish is healthy, happy and back home where he belongs.

And the story of Conquer’s survival has gone viral -- with hundreds of shares on the veterinary clinic’s page and dozens of comments.

People were surprised to find out the life-saving surgery cost nearly $500. But the veterinary clinic is standing by the goldfish owner’s decision to take action.

“While there has been quite a lot of fuss made over the cost of the procedure, we are really just focussed on getting a great outcome for the pet, and their worried owner,” Rienecker said. “Most people wouldn’t bat an eyelid spending this money on a dog, cat or child, so why would we value our beautiful exotic pets any less?”

This isn’t the first time a story like this has gone viral.

Two years ago, a pet owner spent $200 to save a goldfish named George. The fish underwent a life-saving operation to remove a tumor on its head.

The exotic veterinary clinic sees the bond pet owners share with birds, guinea pigs, reptiles and fish every day. So, they say, it shouldn’t come as a shock that people would step up to save a pet fish.

“You really get out of these guys, exactly what you put in,” Rienecker said.