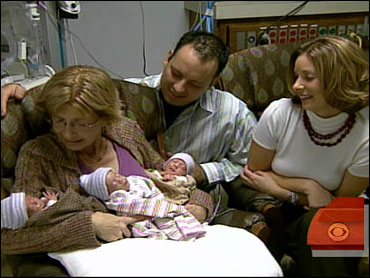 An Ohio woman has given birth to her own, triplet granddaughters.

And in having her daughter's three newborns, Jaci Dalenberg, 56, may have become the oldest surrogate mom anywhere to have had triplets, according to the Cleveland Clinic.

Dalenberg, who has four adult kids of her own, carried the triplets for her daughter, Kim Coseno, a 36-year-old nurse in her second marriage, and Kim's husband, firefighter Joe Coseno, 30.

It's Kim's second marriage and Joe's first. Kim has an 18-year-old daughter and 13-year-old son, but Joe wanted to have kids, as well.

Trouble was, Kim was no longer able to carry a child.

They tried to adopt, but were having trouble with the process.

Knowing that, and observing how good Joe was with Kim's kids, and seeing how sincere Kim and Joe were about wanting kids of their own, Jaci says she thought about it for a year or so, then decided to offer to carry a child or children for Kim and Joe.

The result? The third try to transfer eggs to Jaci turned out to be a charm.

And the triplets, though two are technically twins and the third a "singleton," were born within two minutes of each other, nine weeks premature, on Oct. 11.

In birth order: Elizabeth, the singleton, weighed in at two pounds, 14-1/2 ounces, Carmina was two pounds even, and Gabrielle tipped the scale at two pounds, nine ounces.

Kim says all are "doing great" and one will be coming home later this week, and the others in another week or two.

Kim told Early Show co-anchor Julie Chen Tuesday she "was shocked" when her mom made the offer, "and I didn't even know if it was possible, but it opened up and started just like a little glimmer of hope that it could happen."

"I was completely shocked," Joe agreed. "Our main concern was just for the health of Jaci, and we didn't want her to put herself in jeopardy for our dream of having more children. So, we wanted to make sure that we had everything checked to make sure she was going to be fine with the whole pregnancy."

The main risks, Cleveland Clinic obstetrician Dr. Robert Kiwi explained to Chen, were "prematurity, and then problems with fetal growth, and that was actually what led us to deliver the babies early, because one of the twins wasn't growing at the pace that it should have, and so that led to the decision to do the delivery just about a month ago."

A Spruce Or A Fir?