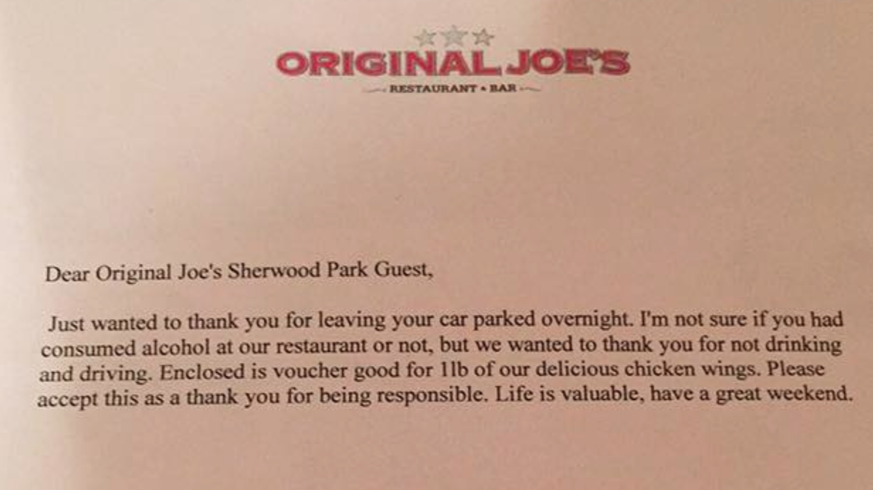 just because you’re not drunk that doesn’t mean that you’re not impaired.When Paula Grzelak-Schultz spotted a piece of paper tucked under her windshield wipers, she thought she was getting fined for leaving her car in a bar parking lot overnight.

With a heavy sigh, Grzelak-Schultz removed the paper and unlocked her car.

But when she unfolded the paper, she was surprised to find out it wasn’t a ticket after all.

Instead, it was a letter from the manager of Original Joe’s Restaurant & Bar in Sherwood Park, Canada.

“Please accept this as a thank you for being responsible,” McLean wrote. “Life is valuable, have a great weekend.”

“I was sure it was going to be a ticket or a scolding from someone for leaving my vehicle there for so long,” Grzelak-SchultzI told CBS News. “I was truly surprised and so pleased that the manager took the time to acknowledge my good judgement.”

“Wow! I’m so impressed. Definitely going back,” Grzelak-Schultz wrote in a Facebook post on Tuesday that has since gone viral with nearly 8,500 shares. “Not just because of the voucher, but because of how well this guy treats his patrons.”

Exactly a week later, Grzelak-Schultz returned to the restaurant to thank McLean for his kindness, and discovered that she’s not the only patron to receive this letter.

“He’s been doing it for over a year, with no expectations,” she explained. “Just being a good guy.”

The restaurant eventually responded to the viral letter on their verified Facebook page.

“Crazy how one act of kindness can go viral. We at Sherwood Park Original Joe’s just want everyone to make it home safe. Thank you for not drinking and driving!” the restaurant said.

Grzelak-Schultz, who shared a bottle of wine that night with her husband and another couple, wants to remind people that “just because you’re not drunk that doesn’t mean that you’re not impaired.”

“Even a drink can impair your judgement while behind the wheel,” she said. “So I want people to be mindful of that next time they get behind the wheel after even just one drink.”