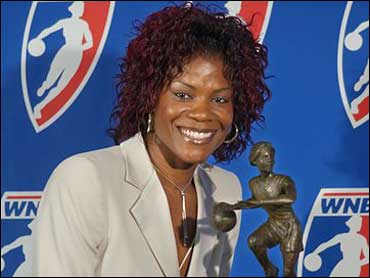 Houston Comets forward Sheryl Swoopes is opening up about being a lesbian, telling a magazine that she's "tired of having to hide my feelings about the person I care about."

Swoopes, honored last month as the WNBA's Most Valuable Player, told ESPN The Magazine for a story on newsstands Wednesday that she didn't always know she was gay and fears that coming out could jeopardize her status as a role model.

"Do I think I was born this way? No," Swoopes said. "And that's probably confusing to some, because I know a lot of people believe that you are."

She said her reason for coming out now is merely because she wants to be honest.

A release from ESPN The Magazine about the story did not disclose the identity of Swoopes' partner.

A five-time All-Star and three-time Olympic gold medalist, Swoopes is the WNBA's only three-time MVP. She played for the Comets during their run of four championships from 1997-2000, but missed the 2001 season with a knee injury.

She said her biggest worry about her revelation is that people will be afraid to look up to her.

"I don't want that to happen," she said. "Being gay has nothing to do with the three gold medals or the three MVPs or the four championships I've won. I'm still the same person. I'm Sheryl."

Swoopes led the WNBA in scoring last year, averaging 18.6 points. She also averaged 4.3 assists and 2.65 steals while making 85 percent of her free throws and playing a league-high 37.1 minutes a game.

She said it "irritates" her that no one talks about gays playing in men's sports, but that it's become an issue in the WNBA.

"Sexuality and gender don't change anyone's performance on the court," she said. "Women play just as hard as guys do. We're just as competitive."