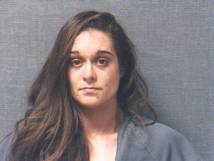 (CBS/AP) ADAMSVILLE, Ohio - A naked, severely burned woman with a strap around her neck arose from a rural eastern Ohio road, crying in agony, and threw herself toward a passing vehicle in a scene that was "something out of a horror show," the motorist told the Times Recorder of Zanesville.

The interview offers graphic details of what is now a death investigation, as detectives try to piece together what happened to 29-year-old Celeste Fronsman.

The man, whom the newspaper did not identify in its online story Wednesday, said the woman, later identified as Fronsman, was pleading for help and comfort, and was burned from head to toe, with all her hair gone, when he spotted her Sunday morning in a heavily wooded, lightly traveled area northeast of Zanesville.

"I caught her and picked her up in my arms," he told the newspaper. "I told her I was going to lay her in the grass and knew then that God had put me there for her."

She was screaming that people were trying to kill her, he said, and he initially wondered if it was a joke.

"I looked around to see if anyone else was there, but couldn't see anyone," he said. So he called 911.

The man said he covered Fronsman with a blanket form his truck and tried to talk with her. He told an emergency dispatcher he was having trouble understanding the woman but she was alert enough to share her name.

He said he offered her some Gatorade and tried to loosen the strap around her neck as she gasped for air. He said they prayed together, and he tried to soothe her.

Because of her wounds, emergency responders had trouble getting her onto a stretcher at the scene. Fronsman was flown to a Columbus hospital. She died Tuesday.

Muskingum County Sheriff Matt Lutz said investigators have identified several people of interest in the case and have evidence from a location in woods near where the woman was found, about an hour's drive from her home in Canton. An autopsy was also planned.