Dean Reynolds is a CBS News correspondent based in Chicago. 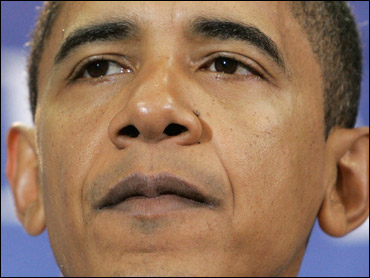 (AP)
Fairfield, Iowa this morning, and Barack Obama is on his game. Blue shirt and big smile upon entering to warm applause, hoots and hollers at an SRO community center here. And why not? A new Zogby Poll out today shows the race in Iowa is tightening. Three percentage points now separate Hillary the Leader from Barack the Challenger. Some suspect that's why Bill Clinton is campaigning in western Iowa today. A pretty decent surrogate.

Though his immediate target is Hillary, Obama's best-received lines before these Iowa Democrats mock the Republicans. He refers to the weird report recently that he and Dick Cheney are somehow distant relatives. "Every family has a black sheep," he says to gales of laughter. And he rebuts the charge that he lacks experience by pointing out that Cheney and Donald Rumsfeld had all the experience in the world and they led the country into a foreign policy disaster. "Longevity," he shouts, "says nothing about your judgment or your character." He says he will end the war in Iraq during his presidency. "It will be the first thing that I do," he said.

Then come the questions.

A woman asks him, "How are you going to beat Hillary?"

The crowd applauds, but Obama parries the question. "'Why should I win?' is the more important question." He answers by saying that he can bring the country together more effectively than anyone else in the race. Through his multi-ethnic background and his life experience, he says, he is better qualified than Hillary, who, he says, carries "the baggage of the 1990s" -- a reference to the highly partisan wars that erupted during the Clinton presidency.

Another questioner asks whether he supports impeaching Bush and/or Cheney. He does not, explaining that it would be a huge distraction when the two will be leaving office soon anyway; it would unite the Republicans but divide the nation. A big, unnecessary distraction during a year when Democratic chances to take back the White House look good.

He tells another voter he's against Michael Mukasey as attorney general. Torture is torture, says Obama. He can't support someone who is ambivalent or ambiguous about it.

Immigration comes up. Obama would do more to secure the borders, but also improve the way the govenrment verifies the employment status of undocumented workers. But he says it is not practical to send 12 million people back home.

He handles each topic with relative ease, conveying confidence. His audience listens closely, and unlike many political rallies I've attended, in this one nobody leaves early.