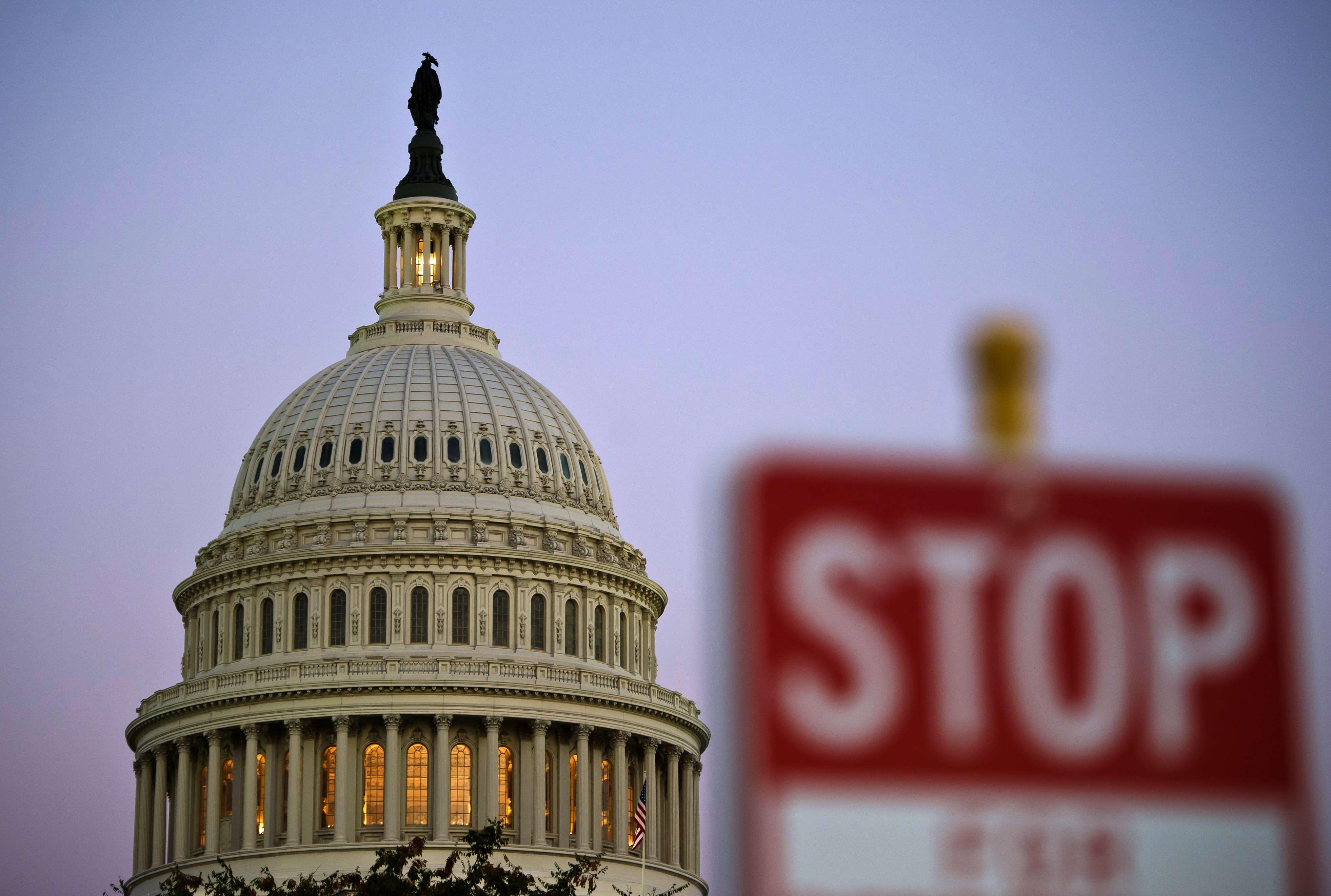 The first full day of government shutdown ended in another stalemate as Democrats rejected an attempt by House Republicans to restore funding to delayed veterans benefits and closed national parks and memorials, and to give the District of Columbia the authority to use local revenue to continue operations.

Much of Tuesday was spent with the two parties trading barbs about who was responsible for a shutdown. No one seemed to stray from their respective positions: Senate Democrats refuse to consider anything other than a spending bill with no extra measures attached, and House Republicans are seeking last-minute negotiations that could offer a chance to chip away at the health care law.

The White House kicked off a national "Get Covered Day of Action" on Tuesday. It's encouraging Americans "to take to social media to spread the word about getting covered" throughout the day, using the hashtag #GetCovered.

After meeting during the day to discuss their options, the House put forward three measures that restore some aspects of government that seemed especially unpopular. Earlier that morning, a group of World War II honor flight veterans who were visiting Washington pushed past the barricades blocking access to the World War II memorial during the shutdown and proceeded with their visit. House Republicans who had been appointed as negotiators pointed to the veterans as a reason for the legislation. "They should, as Americans, as veterans, people who served this country, have the ability to enjoy that site...the silliness that is caused by unwillingness to talk is what we're trying to avoid, and we invite the Senate Democrats to come and join us," said House Majority Leader Eric Cantor, R-Va.

The small-bill strategy appeared to originate from a suggestion made on Fox News Sunday by Sen. Ted Cruz, R-Texas, who spent 21 hours on the floor of the Senate last week railing against the health care law.

Earlier in the day, President Obama used a news conference at the White House to accuse House Republicans of forcing an ideologically-driven shutdown.

"One faction of one party in one house of Congress in one branch of government shut down major parts of the government all because they didn't like one law," Mr. Obama said. "This Republican shut down did not have to happen, but I want every American to understand why it did happen. Republicans in the House of Representatives refused to fund the government unless we defunded or dismantled the Affordable Care Act. They've shut down the government over an ideological crusade to deny affordable health insurance to millions of Americans. In other words, they demanded ransom just for doing their job."

A few hours later, House Speaker John Boehner, R-Ohio, responded with a blistering op-ed piece in USA Today. "The president isn't telling the whole story when it comes to the government shutdown. The fact is that Washington Democrats have slammed the door on reopening the government by refusing to engage in bipartisan talks. And, as stories across the country highlight the devastating impact of Obamacare on families and small businesses, they continue to reject our calls for fairness for all Americans," he wrote. "This is part of a larger pattern: the president's scorched-Earth policy of refusing to negotiate in bipartisan way on his health care law, current government funding, or the debt limit."

The bills to fund on-time veterans benefits, re-open the national parks and memorials and let the D.C. government continue running on its own revenue failed in the House Tuesday evening, primarily because of Democratic opposition; the measures needed two-thirds support to pass. Before the House even voted on them, Senate Majority Leader Harry Reid, D-Nev., called the bills "just another wacky idea from the tea party Republicans," and indicated they had no future in the Democratically-controlled Senate.

White House spokeswoman Amy Brundage added, "These piecemeal efforts are not serious, and they are no way to run a government.

"The President and the Senate have been clear that they won't accept this kind of game-playing, and if these bills were to come to the President's desk he would veto them."

Boehner spokesman Brendan Buck shot back, "How does the White House justify signing the troop funding bill, but vetoing similar measures for veterans, National Parks, and District of Columbia? The President can't continue to complain about the impact of the government shutdown on veterans, visitors at National Parks, and DC while vetoing bills to help them. The White House position is unsustainably hypocritical."

The House GOP on Wednesday is efforting to bring the three bills back up for a vote but with a rules change requiring a simple majority to pass instead of a 2/3 majority.

Though both sides appear to have dug in their heels, there are signs that some Republicans are wary of the strategy. A handful of members - including four from suburban Philadelphia - have now said they would vote for an amendment-free spending bill along the lines of the one being offered by the Senate, according to a count by the Washington Post.

Early polling on the matter spelled trouble for the GOP. A Quinnipiac University National Poll released Tuesday morning shows that by a margin of 72 percent to 22 percent, American voters oppose a government shutdown over attempts to block the Affordable Care Act. And though voters are divided on the law itself, with 45 percent in favor and 47 percent opposed, 58 percent of those surveyed said they opposed cutting off funding a way to stop it from being implemented.

Still, Republicans seem unlikely to change their position - at least not yet. Members concluded their business in the early evening and headed home, sending the government into a second day of shutdown.