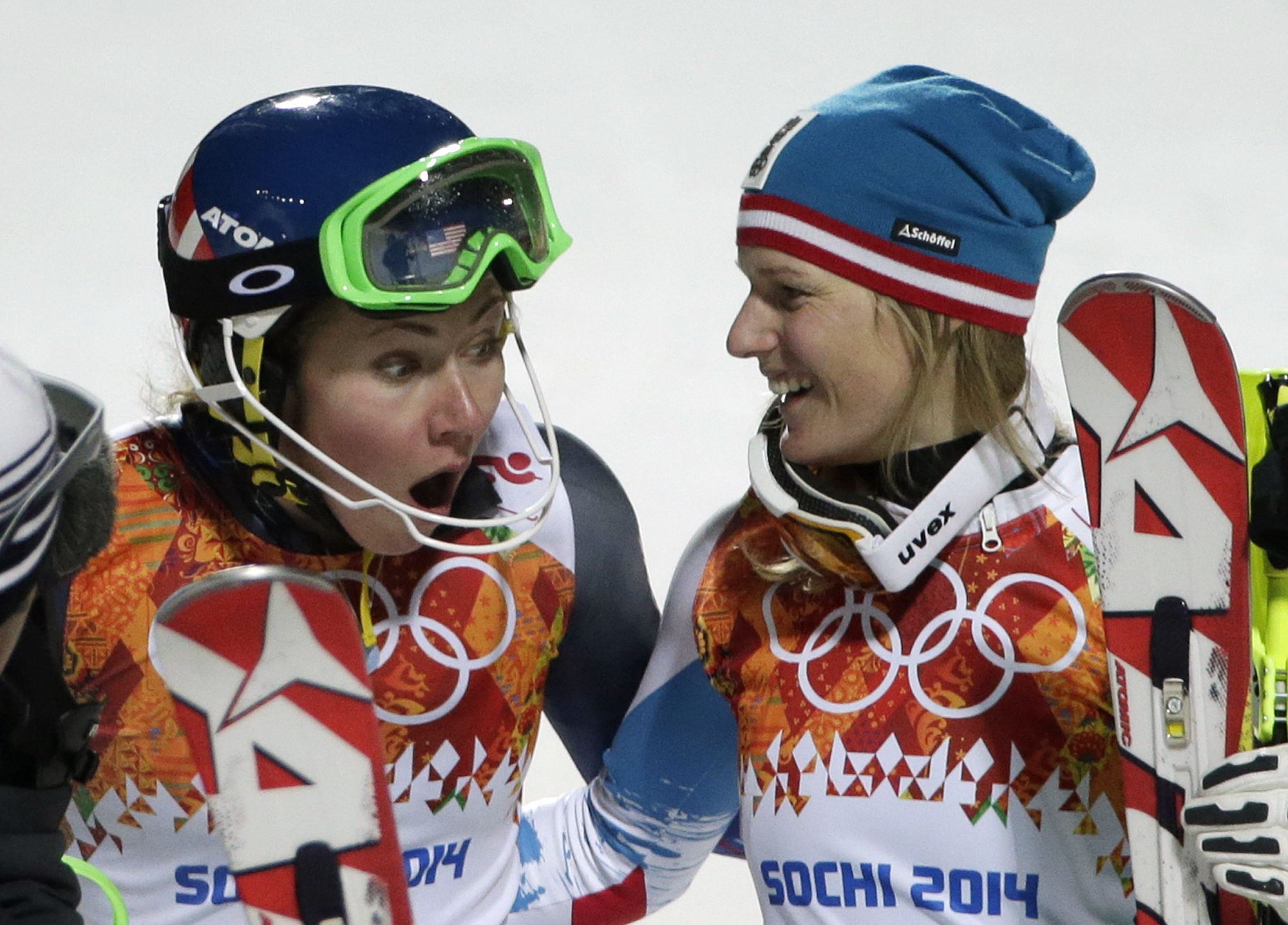 KRASNAYA POLYANA, Russia -- Normally so composed, so in control, so not-very-teenlike on and off the slopes, Mikaela Shiffrin suddenly found herself in an awkward position halfway through the second leg of the Olympic slalom.

Guilty, perhaps, of charging too hard as she swayed this way and that around the course's gates, Shiffrin briefly lost her balance. Her left ski rose too far off the snow. Her chance at a gold medal in the event she's dominated for two years was about to slip away.

"Yeah, that was pretty terrifying for me. There I was, I'm like "Grreat. I'm just going to go win my first medal.' And then in the middle of the run, I'm like 'Guess not,'" the American said with a laugh Friday night. "So, like, 'No. Don't do that. Do not give up. You see this through.' My whole goal was to just keep my skis moving."

Somehow, she did just that. Shiffrin stayed upright, gathered herself and, although giving away precious time there, was able to make a big lead from the first leg stand up. She won by more than a half-second to become, at 18, the youngest slalom champion in Olympic history.

"It's going to be something that I chalk up as one of my favorite experiences for the rest of my life," Shiffrin said. "But my life's not over yet."

Sharyn Alfonsi, who recently profiled Shiffrin for a segment on 60 Minutes Sports, says that coaches credit Shiffrin's mother Eileen, a masters ski champion, for Mikaela’s steady style. Eileen is a constant presence on the mountain when her daughter competes.

"The biggest reason I'm around is because I'm her mom," she told Alfonsi. "And in a normal world, I would be around."

Alfonsi asked the rising star if she was peaking too early.

Shiffrin outraced the best skiers in the world down a floodlit Rosa Khutor course, knocking aside gates with her neon yellow pole handles. She was fastest in the first run, then sixth-fastest in the second, for a combined time of 1 minute, 44.54 seconds.

A pair of Austrians won silver and bronze: Marlies Schild was 0.53 behind Shiffrin, and Kathrin Zettel was 0.81 back. At 32, Schild is the oldest Olympic slalom medalist ever - old enough to have been someone Shiffrin looked up to as, well, even more of a kid than she is now.

She holds the record with 35 career World Cup slalom wins and now owns three Olympic medals in the discipline, two silvers and a bronze.

"You know what's surreal? That Marlies and Mikaela are on a podium together," said Shiffrin's father, Jeff. "Marlies, she's battled, she's had injuries, but she's been the queen of slalom. Mikaela has said, 'I've channeled Marlies.'"

Shiffrin has won nine of the last 19 World Cup or world championship slaloms; no one else has won more than two in that span. Last year, her slalom world title made her the youngest champion in any event since 1985.

Talk about precocious. And serious-minded, too. Since she was about 13, Shiffrin has jotted down thoughts in notebooks, about skiing, yes, but also about what sorts of questions might arise from reporters.

"I first met her when she was 16, and I realized right away that she is one of a kind," said Roland Pfeifer, the U.S. women's technical coach. "She wants to know everything about skiing. The way she trains, the volume she trains, she probably is 25 already."

Shiffrin got a cold while in Russia, so she spent Friday morning drinking orange juice and trying to relax.

After her terrific opening run, she listened to music and did word searches.

In her Olympic debut, Tuesday's giant slalom, Shiffrin finished fifth. But the slalom is her specialty.

"I did envision this moment so many times," said Shiffrin, who wore a stars-and-stripes "USA" temporary tattoo on her neck. "On the chairlift ride to the start in the second run, I started crying a little bit. I started tearing up, because I was like, 'This actually might happen, and I don't know what to think if it does.'"

Three-time Olympic gold medalist Maria Hoefl-Riesch of Germany was in second after the afternoon's opening run but faded to fourth in what she said would be her last Winter Games race.

Tina Maze of Slovenia, who won Sochi golds in the downhill and giant slalom, went from third in the opening leg to eighth.

Shiffrin's gold gave the United States five Alpine medals, second to Austria's seven. With one event remaining, the men's slalom Saturday, it's the second-highest total for the U.S., after eight in 2010. That American team, though, had Lindsey Vonn, now sidelined by knee surgery.

For quite some time, Shiffrin has been likened to Vonn, the four-time World Cup champion and two-time Olympic medalist.

Both are based in Colorado. Both are charismatic. Both were successful early and marked for greatness.

Which is a pretty good thing to be right now.